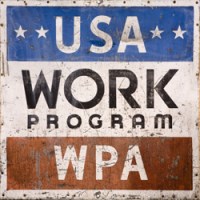 A recession is generally defined as two quarters of GDP contraction as noted by the Business Cycle Dating Committee of the National Bureau of Economic Research. The GDP contraction definition is narrow and cannot be used to define the recessions and depressions that occurred in the first 150 years after The United States was founded.

A broader definition which would apply to a greater number of recession-like events would include sharp rises in unemployment, disruption of the banking and financial system, steep fall-offs in business and consumer spending, rising bankruptcies, and an increase in the number of companies which have to weather periods of financial distress.

One of the features in recessions since the Great Depression, which is not common with those that came before, is government protection of bank deposits. Banks would become insolvent along with their depositors in many cases during “runs on the banks”. The creation of the FDIC shifted the burden of insolvent financial firms from depositors to member banks, with the federal treasury as the last backstop. The pattern was extended further by the creation of TARP during the current recession. It placed almost the entire burden of the rescue on the American financial system with those who pay taxes.

Most economists believe that recessions are started by discreet events. These are very often based on asset bubbles. Rapidly rising values of gold, land, real estate, or equities draw an increasing number of investors into whichever market is experiencing a boom. Those investors call on banks and other institutions for credit to increase both their ability to invest and the scope of their investment. That draws both investors and banks into assets or commodities which are rapidly rising in value. More often than not, the late-comers find that they have borrowed to buy at the peak of a boom, after the value of whatever created the boom has begun to fall. Too much money has chased too little opportunity. Investors and banks suffer as the once-promising market deflates, or “deleverages” as economists have enjoyed saying recently.

Most of the early US recessions – those in the late 1700s and early in the 19th Century – were based on speculation in land or commodities such as cotton. Land speculation was due in large part to assumptions about which areas of the country would be the most productive for products that ranged from crops to timber. These assumptions, in turn, were based on the location of land relative to transportation, whether by water, road or rail. Other land speculation was based more simply on where a commodity or metal could be found. Gold was discovered in California in 1848, initiating the California Gold Rush. The land which held the gold was extremely valuable for a time. That did not last – not even for a decade.

Oddly enough, the latest recession also came about as a result of unchecked land speculation. In this case, however, that land was residential real estate – already under homes and not valuable for crops or mining. Real estate values skyrocketed from early in the decade, and peaked in 2006. Bank lending for real estate purchases rose into the hundreds of billions of dollars. The market became so lucrative and liquid that institutions created instruments to enable investors to bet on the direction of the housing market and the mortgages that had created its expansion. Both the real estate values and the value of the instruments collapsed and the effects may not end for many years.

What follows is the 24/7 Wall St. analysis of the 13 worst recessions since The United States was founded.

Panic of 1797
The United States’ first major economic emergency struck in 1797 as a result of a land speculation bubble bursting. This, combined with the Bank of England withholding payments and the closing of American ports due to a yellow fever epidemic, left economic activity stagnant in the North and caused deflationary effects nationwide through the end of the century.  The crisis also initiated the turn of the American economy from an export economy to a domestic-based one.