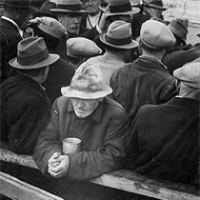 Panic of 1907
Since the Jackson era, the American banking system had been decentralized. Consequently, during periods of boom, banks were able to lend unchecked. The economy was in a period of rapid growth leading up to the recession, due largely to the increased influence of railroad, steel, banking, and oil trusts. After an investor made a failed attempt to corner the copper market, the Knickerbocker Trust Company–one of the largest trusts in the country– failed, fueling a series of bank and trust bankruptcies. The stock market crashed, reaching a low of nearly half of its value from the previous year.

Depression of 1920-21
Although relatively short compared to many other U.S. recessionary periods, the Depression of 1920-21 was extremely severe.  Following World War I, the United States underwent many changes as it adapted from its wartime state.  This included experiencing the greatest levels of deflation in the country’s history, with, according to a Department of Commerce estimate, levels of 18% through 1920. With a tremendous influx of returning troops, unemployment spiked, with 1.6 million people joining the previously steady labor market.

The Great Depression
A period of rampant speculation in the 20’s led to a market crash of epic proportions. Over the course of two days, beginning with the infamous “Black Tuesday,” the stock market lost more than a quarter of its value. Widely regarded as the worst recession in U.S. History, the Great Depression lasted 11 years, 8 months and saw unemployment rates of nearly 25%. U.S. economic production dropped by 50%, and nearly every developed country in the world was severely affected.

Also Read: The Ten American Industries That Will Never Recover

1973-75 Recession
This period stood apart from many other U.S. recessions as it was marked distinctly by stagflation – the combination of high unemployment and high inflation.  The United States faced a surge in oil prices due to OAPEC’s (Organization of Arab Petroleum Exporting Countries) oil embargo, combined with increased spending due to the Vietnam War and a stock market crash after the collapse of the Bretton Woods monetary relation system, officially putting an end to the economic boom which followed WWII.  Unemployment peaked at 9% and, although the recession is recognized as having ended in 1975, the country experienced low economic growth for years afterwards.

Early 1980’s Recession
In the late 1970’s, inflation was on the rise in the United States, in part left over from the 1973 recession.  As a result, the Federal Reserve tightened monetary policy considerably, in turn causing investment purchases to drop as capital became less available.  By winter of 1982, however, inflation continued to drop and unemployment rose for several years.

Current Recession
It is difficult to say whether this current recession will be regarded as one of the worst in American history, but it is certainly shaping up that way. The result of an economy built on overextended consumer credit and risky mortgages, the crisis began in March, 2008 as investment bank Bear Stearns became the first of dozens of major American institutions to fail or be bailed out by the Fed. Bear Stearns would soon be joined by AIG, Lehman Brothers, GM, and Countrywide, to name a few. Unemployment has hovered just below 10% for nearly two years. It remains to be seen whether we are in the midst of a recovery or if this is just the eye of the storm.

-Michael B. Sauter, Douglas A. McIntyre, and Charles B. Stockdale