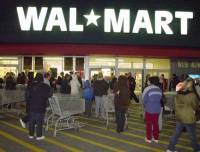 The largest companies in the US based on the number of workers worldwide are not necessarily the biggest in terms of revenue, profits or business locations. Some are much more efficient than others. Apple has fewer than 50,000 workers, but is the largest American tech company. Hewlett-Packard, which is only slightly smaller in sales, has 324,000 people. Apple may be more efficiently run, but it is also in a relatively small number of businesses while H-P makes everything from printers to PCs and has large services, consulting, and software operations.

The firms on the largest employer list are predominantly retail companies, which is to be expected. Wal-Mart, Target, Sears, Kroger and McDonald’s are all among the top ten. Each not only has a large number of locations, which usually require a significant number of workers to staff them.

One of the facts 24/7 Wall St. examined in its evaluation of the ten largest American employers is the number of people they employ overseas.  Kroger has nearly no employees outside the United States, nor does it have any sales there. More than half of IBM’s revenue comes from outside America and so does close to two-thirds of its sales.

One of the great concerns of the US labor movement, some economists, and many politicians is that American jobs are being exported overseas to save money. Among the companies on the list there are some prime examples of this. IBM has been criticized for taking “American” jobs and transplanting them to India. But, in the case of most of these firms, jobs can only go overseas if it can be justified by the sales they generate.

These are America’s Ten Largest Employers.