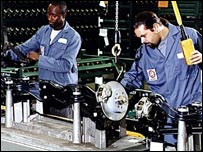 The size of the American blue-collar workforce continued to decline in the last decade. Between 2000 and 2010, the economy lost roughly 4 million blue-collar jobs, according to data from the Bureau of Labor Statistics, mainly as a result of manufacturing job losses, the housing crisis and, of course, the recession. 24/7 Wall St. analyzed the ten states where this erosion was the worst. These are the leading edge of an awful trend that has significant implications for the future of the U.S.’s economic recovery.

Early in the decade, the manufacturing base in the U.S. began eroding swiftly as companies accelerated the relocation of plants to areas of the world with inexpensive labor, most notably China and Mexico. Later in the decade, as the housing market collapsed and the economy fell into recession, large industries like auto manufacturing were further hurt by drops in demand.

The housing crisis hit another segment of blue-collar jobs. Falling home prices nearly halted building of new houses, and the home construction workforce was decimated. In states like California and Nevada, some home values plunged by more than 60%. Construction jobs in those areas disappeared. Property values fell sharply in other states like Arizona and Florida. Across the entire country, the construction industry shed a million jobs from 2000 to 2010

The appearance of some of these states on this list is unexpected. Michigan and California are here, but so are Connecticut, New Hampshire and Utah. Connecticut had large numbers of small factories that made finished goods in cities like Bridgeport and New Haven that closed down. In New Hampshire, machining factories are now a smaller part of the economy than they were in 2000. Mining activity in Utah has dropped as the demand for metals used in U.S. manufactured goods fell due to the shift to overseas manufacturing, which was also further exacerbated by the recession.

The single largest question about how quickly the economy will recover is the source of future new employment. The IMF recently predicted that U.S. annual GDP growth will be below 3% until 2016, largely because it believes that unemployment will be 7% through 2014. There is no reason to believe that manufacturing or construction will rebound. That leaves the services sector, which has a large blue-collar component of retail sales people, hospitality workers, and fast food restaurant employees. These jobs do not pay nearly as well as the jobs on the Detroit assembly lines did. They also do not offer the extravagant benefits and retirement packages that the auto industry once did. This only serves to highlight the effects this decade-long trend of blue-collar job erosion has on the U.S. economy.

In order to identify the states in which blue-collar jobs have decreased the most as a percent of the total workforce, 24/7 Wall St. reviewed data from the Bureau of Labor Statistics on the type of occupations people have in different states. Using accepted definitions of white and blue-collar jobs, we calculated the percent of the total workforce that was blue collar in 2000 and in 2010.  Some of the positions considered blue collar include manufacturing, retail sales, drivers, food preparation and construction jobs. We then identified those states where the percent of the blue-collar workforce had decreased significantly.

These are the states where blue-collar jobs are disappearing.