Seven Jobs That Will Make You Sick 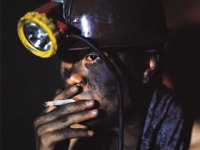 Every year, people in the United States become ill as a result of occupational hazards. Workers exposed to asbestos can develop cancer. Coal miners can get black lung disease. Some of these diseases can be fatal, even when properly treated. 24/7 Wall St. identified some of the most common jobs that have a high risk of sickness, and the diseases and ailments associated with them.

Although many of these risks are well documented, many workplaces still fail to properly protect workers. Incidence of mesothelioma, the cancer caused by asbestos exposure, dropped sharply once the risk was understood. Exposure, however, still persists. It takes decades to address other risks.

Formaldehyde was classified as a carcinogen by the National Toxicology Program just this past June. The chemical has been known to cause cancer since the 1970s, but the official designation has been fought for years by the chemical industry. People who work with formaldehyde, such as morticians, have been known for a number of years to have higher rates of leukemia than those who are not exposed to it. According to a recent article in The New York Times, the industry appears reluctant to change its practices to better protect against it.

24/7 Wall St. identified many of the most common diseases that are related to occupation hazards, including cancer, lung disease and heart disease, according to the Centers for Disease Control and Prevention and other scientific studies of disease in the workplace. Using the Bureau of Labor statistics, we identified seven professions with exceptionally high rates of certain illnesses. Each of the occupations is listed with its respective long-term risk and its median annual wage.