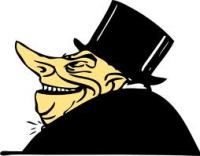 More than 2,00o Americans made in excess of $10 million last year. Most of them probably earned it, perhaps at investment banks or hedge funds. Some may be rich farmers who paid themselves well as the prices of commodities rose. Some of the group may have created thousands of jobs. People who make much less than the “super rich” do want them taxed at new high rates.

Protestors in downtown Manhattan claim the top 1% of Americans are paid too much. The top 0.1% are even better off, and why shouldn’t they be? These wealthy could be offering them jobs. Perhaps the protesters would rather sleep in cold rain than take what they think is filthy money.

The Social Security Wage Statistics report came out recently. The results were to be expected. The agency data showed about 66.2 percent of wage earners had net compensation less than or equal to the $39,959.30 raw average wage that was calculated for the report. Many of these people believe that they should make more money. Almost all of them probably think people who made more than $10 million last year should have made much less.

The widely held assumption is that the rich people in the U.S. are greedy financiers who trade exotic assets and do nothing to add jobs to the economy or build factories. Since the Social Security Wage Statistics report does not show how many of these people run medium-sized businesses or farms, no one can say whether they have created hundreds of jobs each. The rich can be blamed because they made too much in 2010. But, too few statistics say whether that blame is, in most cases, fair.

Many people in the federal government want to tax Americans with high incomes. Neither White House proposals nor congressional counter proposals have included statistics that show who the rich really are. That means high taxes could be regressive in many cases. Bankers who face tax increases may not change their work habits. People who own modest-sized businesses may.

Since no one involved in the tax-the-rich debate has provided a census of who America’s highest-paid people are, the debate lacks the facts needed to tell whether the action would make much sense.