The American Cities Where Mortgages Are Staying Afloat 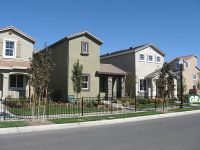 President Obama recently announced he would extend the nation’s mortgage refinancing program in an effort to provide relief to homeowners whose mortgages are worth more than the value of their homes. With 11 million underwater households no one can claim the housing crisis over. However, some regions have survived the crisis better than others. In those areas, home values are either stable or rising, and unemployment is below the national average.

24/7 Wall St. has identified the markets with the least underwater homes. When the housing bubble was in full swing in the beginning of the 2000s, millions of Americans bought new homes at historic high prices. Based on the belief that property values continue to rise, it seemed a good strategy. However, when the housing bubble finally burst and the recession began, home values declined sharply, unemployment skyrocketed, and homeowners could no longer make their mortgage payments.

Strong employment and housing markets went hand in hand. Regions that added jobs also had sizzling housing markets. Of course, the housing boom in these areas contributed to further job growth. In places like Las Vegas, which saw major job growth during the the boom, home prices increased by 36% during the first half of the decade. When the market collapsed, these regions were hurt the most. The extension of the Home Affordable Modification Program, which is considered a failure by many economists, may provide a shot in the arm to such markets.

It appears the only places that managed to survive this crisis were those that were suffering economically at the time when people were building and buying new homes. These cities, which include Rochester, Buffalo, and Pittsburgh, were in many cases former industrial powerhouses that have been steadily losing jobs for the past 40 years. In these regions, home values remained stable during the crisis and relatively few risky mortgages were taken out on new homes.

Now, these regions, which did not benefit from the nation’s housing boom, are doing better than most. Because fewer homes were built in the last decade and these cities are now adding jobs, prices have remained stable and even increased.

Using data obtained from housing data and analytics firm CoreLogic, 24/7 Wall St. has identified the ten regions built around an urban center — core-based statistical areas — with housing markets that had the lowest percent of homes with underwater mortgages. We compared the data to the number of REO sales (sales of homes that had been repossessed) and distressed sales (sales by homeowners who could not continue to make mortgage payments) for the same regions. We obtained unemployment data from the Bureau of Labor Statistics. We obtained data on homes built since 2000 from the U.S. Census Bureau.