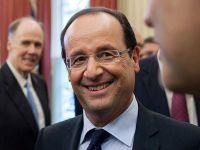 France has taken another step toward severe austerity programs set by the central government. Its economy has dipped into a recession. New President François Hollande claims that the government needs to cut costs and place an extreme tax on the income of the country’s richest citizens. According to the Wall Street Journal:

Mr. Hollande said his government would propose a budget this month packed with as much as €20 billion ($25.6 billion) in new taxes and €10 billion in spending cuts. He confirmed that the budget will include a special 75% tax for people earning more than €1 million a year that has fanned fears of an exodus of France’s wealthiest citizens.

The painful measures are necessary to fulfill pledges to lower the country’s budget deficit to 3% of gross domestic product next year from 4.5% in 2012 and reassure investors, who have been more lenient with France than with other highly indebted euro-zone countries such as Italy and Spain.