What Donald Did to His Business in 2016

PrivCo analysis finds the Trump Organization revenue to drop to under $9 Bln, finishing the year at $8.6 Bln.

Kellyanne Conway, between never taking a day off and doing everything short of traveling back in time, has tried hard to save her candidate’s presidential hopes. Political tact (or lack thereof) and presidential blunders aside, she has done a tremendous job at taming the off-the-cuff nominee. Conway has succeeded at reining in the nominee in the midst of resurgent Clinton email scandals, so that Trump now looks to be closing the gap once again on Hillary.

While Mrs. Conway has worked miracles on the political front, Trump has had to employ someone closer to home to address his business concerns.

In the last three weeks, Ivanka Trump has launched her #womenwhowork campaign in what seems to be a coordinated effort to mitigate the blowback generated by Trump’s recent remarks toward women. Ivanka has always had a prominent role in the Trump Organization , presenting a more polished and professionally friendly face to contrast her father’s brash and defiant tone. Now her efforts, increasingly more public and grandiose, are part of a full-scale PR onslaught to protect the future business interests of the Trump Organization after the election.

While Trump’s comments have alternately invigorated and decimated his campaign, sometimes within the same week, his political troubles will all but end, for better or worse, next Tuesday. Trump’s business, however has, to last him for the rest of his foreseeable life. While Trump is currently the sole proprietor of the Trump Organization, his children stand to gain the most from the continued success of the company, along with key executives Michael Cohen, Jason Greenblatt, Allen Weisselberg and Matthew Calamari.

At PrivCo, we have been tracking the privately-held Trump Organization since 2007, paying special attention to the company’s revenues and employee figures and collecting certain balance sheet items when made available. Historically, the company has tracked relatively in line with the broader real estate market as a whole. Over time, the company has been able to weather a number of civil lawsuits, nationally publicized Trump scandals, and numerous other mishaps that would make any other Faux Fortune 500 Company billow under the pressure.

The microscope of a presidential election is a finer one than any his organization has ever seen. We don’t need to go into the myriad of things Trump has said to hurt his poll numbers, but how have Trump’s comments affected his business?

We utilized PrivCo’s Private Company Financial Database, in conjunction with a number of Federal Election Committee income disclosure documents, aggregated market analysis reports, and PrivCo proprietary data, to analyze how the Trump organization has fared under this election.

Below are our findings highlighting the most comprehensive analysis on the Trump Organization to date, and how this particular company and brand has been affected by this campaign.

Methodology:
We cannot state emphatically enough that we are NOT attempting to value Trump’s personal wealth. The purpose of this analysis is to accurately estimate the value of the Trump Organization itself, regardless of Trump’s personal assets.

We utilized publicly disclosed information from the U.S. Office of Government Ethics financial disclosure documents and then tracked the changes from 2015 to 2016 on Trump’s personal income from those assets. While those disclosures give ranges, the changes from year-to-year show a percentage increase or decrease.

While those documents are intended to show personal income, Mr. Trump’s hubris extends beyond his affinity for attaching his namesake to the outside of buildings. In a move that is different from his peers (and some would say legally daft), Donald Trump has assigned himself, either as a director, president, shareholder, c-level executive, board member, or consultant to 515 assets, or ~96% of total Trump Organization assets. In contrast, former Republican nominee and Bain Capital Partner Mitt Romney’s Personal Financial Disclosure document was nearly half as long, while Bain and Romney’s business interests after Bain were significantly more diversified than Trump’s.

It’s estimated that the Trump Organization derives roughly 1/3 of this business from hotel management and licensing fees, a part of the business from which Trump lost $230MM of income from 2015-2016 according to Forbes.

Trump Organization’s ancillary businesses, including the sale of Mr. Trump’s books, have seen an increase in the past year, but represent an insignificant portion of the firm’s total revenue. The company’s numbers took rather small hits on the dissolution of some partnerships like the Macy’s retailing contract for Trump products (currently they are only sold at Trump outlets within his Hotels, Resorts and Casino’s), but none represented a substantial portion of the company’s revenue.

Trump’s crown jewel as of late has been the numerous golf courses he owns across the United States and abroad (17 in total), which have all seen a decline in revenue, with his U.S. assets dropping by 24% year-over-year, save for the exception of Trump National Doral in Miami.

Conclusion:
While Trump may present his brand as a shining example of American Industrial Entrepreneurship, the truth is that the Organization is about average as far as mixed-use real estate and diversified business portfolios go. The Trump Organization has followed the market, maximizing losses during the early- to mid-90s, taking some serious write-downs in the real estate bubble of 2007, and reaping some positive gains in the half decade following that period, seeing an average year-over-year increase of 2.5%.

As we stated before, however, this year is different. While the luxury real estate market, especially in New York, has seen significant write-downs over the last 18 months, there is no denying that Trump’s comments have gone above and beyond this to negatively affect the perception of his brand in the eyes of Trump’s core clientele and business associates.

While the election results can definitively point to how the country feels about Trump’s comments, it will take years to truly identify the impact this election has had on his business. To make up the difference for the losses conceded in his bid for the 2016 Presidential election, Trump may need to look to other avenues, including new media, in the years to come. 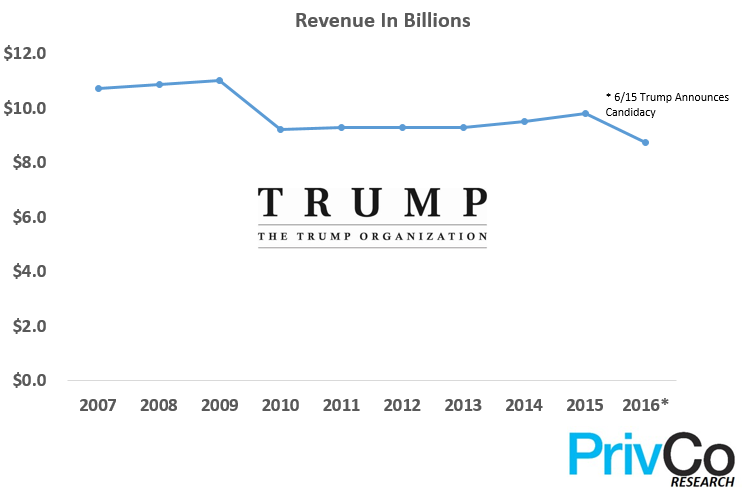