New York State has put out a list of its 20 “hotspot” ZIP codes. There is a deep concern that COVID-19 has started to rise sharply in the American state with the highest death toll. Deaths in New York State total 32,794 of the country’s 211,975.  While the state has 15% of deaths, its portion of the total national population stands at less than 6%.

COVID-19 already may have begun to spread from these ZIP codes. Most are in highly populated areas in and around New York City. These, in turn, sit close to other ZIP codes with dense populations. In fact, most are adjacent to at least one other ZIP code on the list of 20. Twenty-six percent of all COVID-19 new confirmed cases in the state yesterday were in the 20 ZIP codes.

Cuomo’s office commented to the people in these ZIP codes: “We will focus on testing and compliance efforts in these areas. If you live in one of these ZIP codes, treat this seriously. Wear a mask. Wash your hands often. Get tested. Don’t attend large gatherings.” 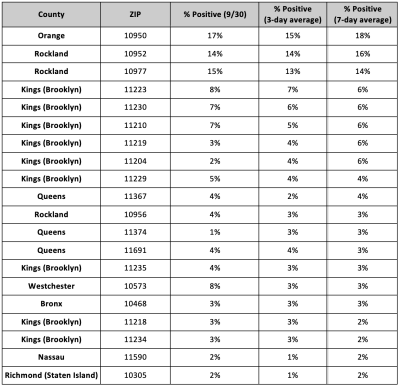