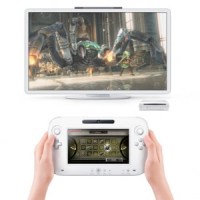 Source: courtesy Nintendo
The new Nintendo Wii U may be a super game console, but probably not super enough. The problems the product faces go well beyond the success of competitive products from Microsoft Corp. (NASDAQ: MSFT) and Sony Corp. (NYSE: SNE).

The Wii U will be available in the United States on November 18, so it will just catch the start of heavy holiday shopping. That may favor its success, but its lack of original features will hurt it. Owners of the new hardware will be able to make their own TV program lists and record programs through TiVo Inc. (NASDAQ: TIVO) and other time-shift machines. But many American homes already have set-tops that do these things. So, Nintendo has the disadvantage of a lack of originality.

The other hurdle that Nintendo probably will not clear is the same one that Microsoft, Sony and most PC companies have. People have rapidly adopted portable smart devices as their preferred platforms for a number of daily functions — game playing among them. The likely rapid sales of the Apple Inc. (NASDAQ: AAPL) iPhone 5 and the success of the Samsung Galaxy S III make the challenge worse.

The NFL Team That Loses the Most Money on Empty Seats