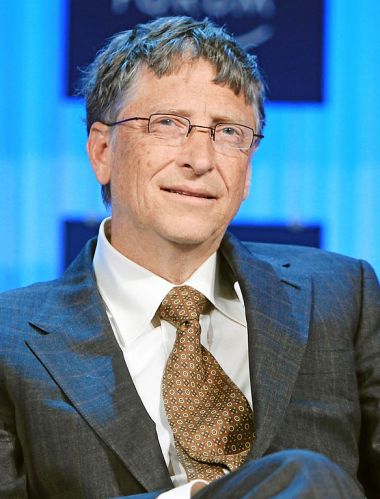 Source: By World Economic Forum (Flickr) CC-BY-2.0, via Wikimedia Commons
Which billionaires list is better, the one produced by Forbes, which is decades old, or the new list created by Bloomberg? The answer is that neither is better than the other, or perhaps neither is worse.

Take the measurement of the total combined wealth of the world’s top billionaires. According to Bloomberg:

The richest people on the planet got even richer in 2013, adding $524 billion to their collective net worth, according to the Bloomberg Billionaires Index, a daily ranking of the world’s 300 wealthiest individuals.

The aggregate net worth of the world’s top billionaires stood at $3.7 trillion at the market close on Dec. 31, according to the ranking. The biggest gains came in the technology industry, which soared 28 percent during the year. Of the 300 people who appeared on the final ranking of 2013, only 70 registered a net loss for the 12-month period.

The Forbes 2013 assessment claims there were 1,426 billionaires with an aggregate net worth of $5.4 trillion, up from $4.6 trillion the year before — an 18% rise. Of course, the total number of people counted by the two media are very different.

Forbes reported that Carlos Slim was the world’s richest man with a net worth of $73 billion. Following him was Bill Gates of Microsoft Corp. (NASDAQ: MSFT) at $67 billion. In third place is Amancio Ortega, owner of Zara, at $57 billion, followed by Warren Buffett at $53.7 billion. According to the Bloomberg list:

Bill Gates, the founder and chairman of Redmond, Washington-based Microsoft Corp., was the year’s biggest gainer. The 58-year-old tycoon’s fortune increased by $15.8 billion to $78.5 billion, according to the index, as shares of Microsoft, the world’s largest software maker, rose 40 percent.

Gates recaptured the title of world’s richest person on May 16 from Mexican investor Carlos Slim. Gates’s fortune has also benefited from a rally in stock holdings that include the Canadian National Railway Co. and sanitizing-products maker Ecolab Inc., which rose 34 percent and 45 percent respectively.

The change in positions means very little. The Forbes list was produced in March.

And Bloomberg claims that Amancio Ortega has passed Warren Buffett on the billionaires list:

In weeks, this and hundreds of others creations inspired by pop culture or couture catwalks will fill the company’s more than 1,600 Zara stores in 85 countries on six continents. Since opening the first shop in his seaside home of La Coruna in 1975, billionaire founder Amancio Ortega has built the world’s largest clothing retailer — and a fortune exceeding Warren Buffett’s, Bloomberg Markets magazine reports in its December cover package.

Once again, the time lines between Forbes and Bloomberg are different, so who is to say who the world’s first, second, third or fourth richest man or woman really are? Clearly, it is impossible to weigh, unless perhaps the measure is made minute by minute — which cannot be done

Forbes claims an army of reporters who sift through everything from public holdings and real estate builds its list. The magazine’s editors say they try to confirm the numbers with the billionaires themselves, who, of course, may not tell the truth.

The index is a dynamic measure of the world’s wealthy based on changes in markets, the economy and Bloomberg reporting. Each net worth figure is updated every business day at 5:30 p.m. in New York. Stakes in publicly traded companies are valued using the share’s most recent closing price. Valuations are converted to U.S. dollars at current exchange rates.

Closely held companies are valued in several ways, such as by comparing the enterprise value-to-Ebitda or price-to-earnings ratios of similar public companies. The criteria used depends on the company’s industry and size. Calculations of closely held company debt are based on the net debt-to-Ebitda ratios of comparable peers.

When ownership of closely held assets cannot be verified, they aren’t included in the calculations. The specific valuation methodology for each closely held company is included in the net worth analysis section of a billionaire’s profile. The full profile is available only to Bloomberg Professional subscribers.

A liquidity discount of 5 percent is applied to most closely held companies where assets may be hard to sell. It is noted when a different percentage is used. No liquidity discounts were used in calculating values of public stakes. In some instances, a country risk discount is also applied, based on a person’s concentration of assets and ease of selling them in a given geography. A country’s risk is assessed based on Standard & Poor’s sovereign debt ratings.

Net worth calculations include dividend income paid and proceeds from the sale of public and closely held shares. Taxes are deducted based on prevailing income, dividend and capital gains tax rates in a billionaire’s country of residence. Taxes are applied at the highest rate unless there is evidence to support a lower percentage. For calculations of cash and other investable assets, a hybrid return based on holdings in cash, government bonds, equities and commodities is applied.

No assumptions are made about personal debt. Family members often hold a portion of the billionaire’s assets. Such transfers don’t change the nature of who ultimately controls the fortune. As a result, Bloomberg News operates under the rule that all billionaire fortunes are inherently family fortunes.

Each billionaire or his or her representative is given an opportunity to respond to questions regarding the net worth calculation, including assets and liabilities.

How big a difference is there between the methods of measurement? Each of the two media would say its is better. However, it is the “daily” yardstick that begs to be questioned.