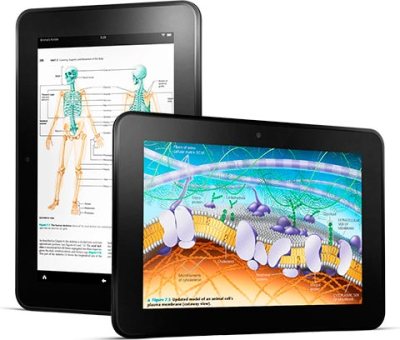 Source: Amazon.com Inc.
If the fourth quarter matters as much to tablet sales as it does to other consumer electronics devices, Amazon (NASDAQ: AMZN) will almost certainly have a huge lead. New research shows Kindle sales will easily surpass those of almost all other tablets

According to new data from Kantar’s research arm:

Amazon is dominating the online tablet buying process, attracting around double the number of potential tablet buyers than its nearest rivals and driving traffic to its own product the Kindle Fire. 81% of tablet product page visitors on Amazon visit the Kindle Fire page, compared to just 30% for Samsung.

Online conversion rates among consumers who have visited a branded tablet product page were 6.6% for the Kindle Fire and 3.4% for Apple’s iPad. Samsung and the Galaxy Nexus are being squeezed online with lower rates of consideration (Samsung scores just 24% compared to 57% for Apple) and lower conversion rates.

Amazon has advantages built by tablet sales which Apple (NASDAQ: AMZN) has, but Samsung does not. The Kindle is part of an eco-system which includes the sale of an array of multi-media products–primarily e-books and streaming video. Apple’s TV initiative puts it on a similar footing in streaming media. Its massive apps business is not, and cannot, ever be matched by Amazon.

Samsung sits in a unenviable position of having no “after market” of app, streaming media, or e-book products. Whatever Samsung makes on its hardware, it has nothing on the back end…no long tail of revenue beyond the first sale.

And, it is the long tail that is the essences of the Amazon and Apple systems–with the consumer and financially. It is the beauty of their business models. Amazon’s dominance in tablet sales is already being leveraged into sectors which could be must greater than any of its legacy e-commerce operations.