The endless wave of changes in retail just never seems to end. In the 1990s it was Walmart Inc. (NYSE: WMT) that killed thousands of retailers. Now it is Amazon.com Inc. (NASDAQ: AMZN) which can go after any segment of retail that it wants. Many investors have believed that the dollar store theme was largely immune to Walmart and to Amazon, and that may still at least have some partial truth—but sometimes a simple email can change everything.

Whether this is a whole new push or just one ongoing effort on top of dozens of other efforts will still probably be based upon your opinion. That said, this effort has partially been going for years. Amazon sent out an email on Thursday titled “The new $10 and under store” in the subject field.

While Amazon has always had thousands of items that were under $10.00 for its customers, it’s pretty easy to imagine what Amazon is doing here. 24/7 Wall St. has tracked the dollar store segment for years, and has, by and large, considered the two leaders in the field largely immune to Amazon, Walmart and to other segments.

The thing to remember here is dollar stores are no longer just dollar stores. They have gone beyond the dollar and participated in a “reach up” strategy to capture sales of higher priced items in the $5, 10, and sometimes more range.

What may lend more credence to targeting the dollar stores is that Amazon’s $10 and under strategy comes with an advertised free shipping section front and center on many of the items. It shows sunglasses, backpacks, trash bags, clothing, jewelry, games, movies and film, electronics, home decor and too many more items to name.

Before thinking that Amazon is only targeting dollar stores here, note that the reality is that Amazon will target anything and everything it thinks or hopes it can make a buck from. Jeff Bezos himself even said it takes the ability and willingness to try anything out within reason, and where the cost of experimenting is low. That said, Bezos has already had an effect on all retailers. The only thing that feels different here is having the $10 and under store and the free shipping being front and center.

Five Below Inc. (NASDAQ: FIVE) would also be in the under $10 category here, as its name is pretty straightforward with what you can expect in their stores. Five Below shares closed up 0.1% at $126.56 on Thursday, and it has a $7 billion market cap with sales last year of $1.3 billion.

Before dollar store investors hit the panic button here, they might want to consider yet again that selling items under $10 is not anywhere close to a new undiscovered effort by the company. It has had items under $10 for years. Sending out a new “$10 and under store with free shipping” email has not been a normal effort for Amazon, but then again it has had daily deals for years now—and many of those items have been and are currently under the $10 price tag.

Another consideration here is that perhaps what dollar store operators fear the most is a great economy where there are more job openings than there are able-bodied adults to fill them. Isn’t that where we are now?

As a last reminder, Amazon’s under-$10 category might not perpetually be under $10. The email did say at the bottom:

Here is an image of its new email effort below. 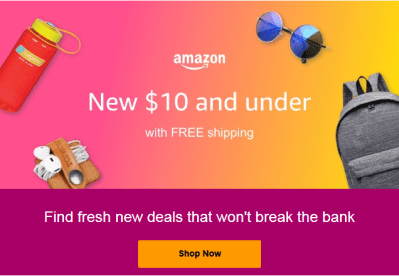