There have been some rather harsh changes over the past two decades when it comes to selling apparel and in all levels of retailing. The so-called Retail Apocalypse is undeniably an absolute reality. There are continual long-term risks for many apparel and retail stores, and in many cases those risks pose a threat to the companies who act as their landlords.

Gap Inc. (NYSE: GPS) was one of the nation’s greatest retail growth stories during the 1990s, but that was a very long time ago, and its shares are now back to levels from 15 years ago. With the announcement that Gap was reversing its prior decision, the company also indicated slightly better guidance for its earnings report due later in February. It should have created new enthusiasm, but some ongoing issues are making the company step back from its decision to break up the company.

Some alternative data from Thinknum shows that cutting Old Navy loose would have created the old Gap (Gap, Banana Republic and so on) with a shrinking footprint and Old Navy with a growing one. Quite simply, the split-up would have created “Good Company” and “Bad Company.” An issue brought up in the Thinknum report is that keeping Old Navy on as the growing footprint in the legacy parent company was likely protected from the ongoing pain felt by countless other mall-based retailers.

Where things get very tricky for investors is that Gap’s shares shot up almost 10% initially on the news, but a small gap up of less than 2% the morning after rapidly turned into a small loss for the day.

Thinknum showed that Old Navy’s store count rose by almost 10% in 2019, while the Banana Republic and Gap brand stores showed a decline. Banana Republic’s number of stores has fallen about 12% over the past four years, while the Gap stores have contracted by about 20%. That report from Jon Marino said:

Spinning out Old Navy would have cut loose a growing brand from the Gap’s portfolio, at the same time other assets were shrinking their footprint – not necessarily a great recipe for salvation of the parent entity.

That’s not to say that Gap’s got nothing going in its favor – athleisure brand Athleta is suppling its top line with store count growth – but Old Navy was a big driver of revenue for Gap, and now, that’s not going to change.

Where things get very dicey is that there are fewer job openings at the retailer than have been seen in several years. Marino’s report also said:

Having made the call to keep Old Navy, Gap appears to have made the call to reduce open positions – the big spikes in data represent pre-holiday hiring, which appears to come off the board all at once. But most notable thing in our chart is the steeper-than-average reduction in job postings to begin 2020. Right now, job postings are a low not seen since 2017, which could signal longer-term plans to cut back on staffing for underperforming locations – or, to eliminate them completely in the long-run, like so many other popular chains have done to stave off the retail apocalypse.

Many investors may have thought that coming out slightly above earnings guidance and keeping the group of companies together would have been a positive. The persistent issues that Gap faces include that it is still looking for a permanent head of the company, that Old Navy keeps looking better than the two other major shops (Gap, Banana Republic), that its other brands are not large enough to make a major contribution, and that those pesky apocalyptic trends in retail refuse to go away.

One last consideration is that all this has been happening while there is a great economy. Imagine what sort of problems the Gap team will have when all those media warnings about an imminent recession actually do come true.

Gap shares were down just over 1% at $18.40 on Friday afternoon, and the trading volume was not even that much more than average, considering what would seem to be game-changing news. Gap’s 52-week trading range is $15.11 to $31.39, and its market cap is now less than $7 billion. The short interest of 40.1 million shares was also more than 18% of its float.

Last year’s revenues (fiscal 2019) for the entire Gap company were almost $16.6 billion, and the consensus from Refinitiv projects revenues of roughly $16.2 billion for fiscal years 2020 and 2021. Looking back in time shows that Gap had net revenues of $16.15 billion for the 2013 fiscal year. Gap’s problems have not vanished with this decision to keep the company together.

ALSO READ: 4 Gold Stocks to Buy Now Before the Inevitable 10% Sell-Off
Get Our Free Investment Newsletter 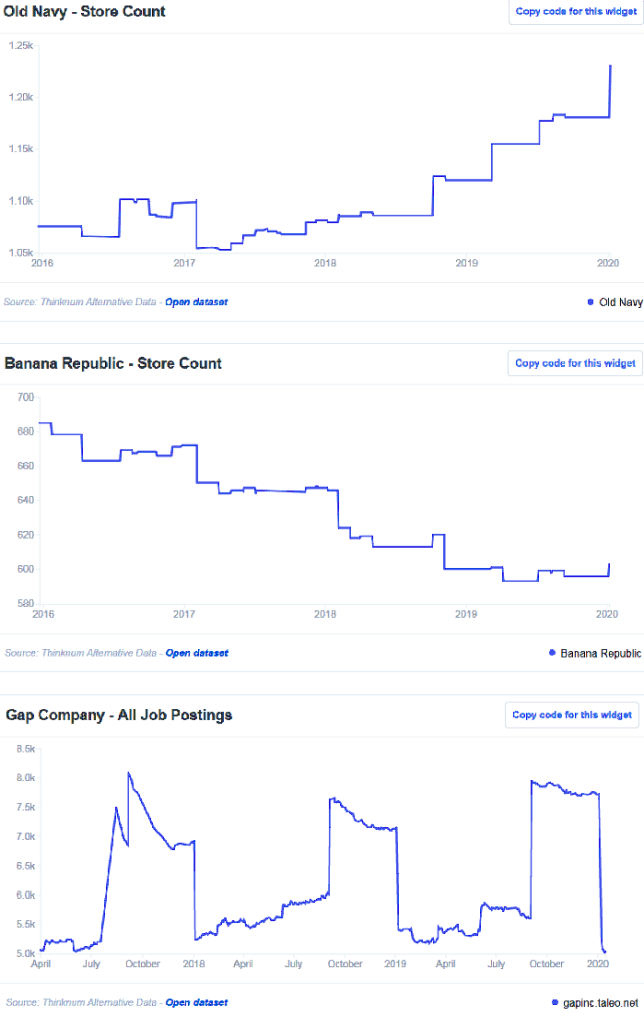