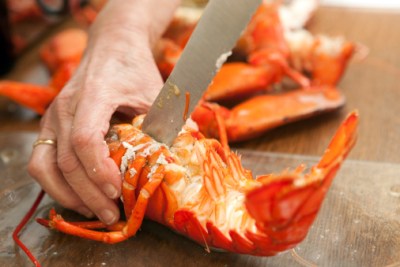 Source: Thinkstock
While it was easy for restaurant operators to blame the lousy weather for slack sales during the harsh winter we just went through, now that temperatures have warmed up we should begin to see improvement. Unfortunately, if the trends we’re starting to see now are any indication, don’t expect fast food restaurants like McDonald’s (NYSE MCD) or casual dining chains such as Darden Restaurants (NYSE: DRI) Red Lobster and Olive Garden to report demonstrably better results anytime soon.

According to a just released survey by the market researchers at NPD Group, the first quarter of 2014 was pretty much a bust for restaurateurs because extreme weather largely kept people from dining out. Through January, February, and March, traffic at quick-serve restaurants — which includes both fast food and the much stronger fast casual segment — was flat, while midscale outlets and casual dining chains saw declines of 4% and 2%, respectively.

McDonald’s reported first quarter revenues rose just 1% systemwide to $6.7 billion while profits tumbled to $1.2 billion from $1.27 billion in the year-ago period. On a monthly basis same store sales were able to climb back to even in April, though on a quarterly basis they remain on a fairly constant downward trajectory.

For Darden, the Olive Garden Italian restaurant chain experienced drops in traffic and comps, with the former falling nearly 13% in December and then ameliorating to just 4% declines in January and February, while comps tumbled 10% the first month and turned down on 2% in the two months that followed.

It was even worse at the seafood chain where Red Lobster had double-digit declines in traffic and comps across the entire period, except for a 4.5% drop in sales in Februaryp. 3. The dramatically failing health of the chain explains why Darden’s management was willing to risk shareholder anger by unloading Red Lobster onto Gold Gate Capital for a song.

So analysts and investors have been looking to the spring thaw as a time for the restaurant industry’s renewal, where sales and traffic would heat up again with the temperatures. Unfortunately for all involved, that doesn’t seem to be the case.

According the Nation’s Restaurant News, while there’s a hopeful sign to be found amongst rising comps in the industry, far more worrisome is the continuing decline in traffic, a trend that actually seems to be picking up steam. The warmer it’s getting outside the more people are staying away. 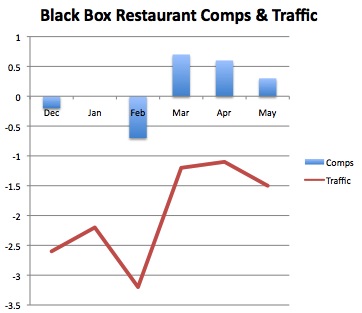 The latest data from Black Box Intelligence and People Report shows restaurant comps rose 0.6% in May, the third straight month of positive same store sales, but it also indicates traffic fell 1.5% in the month, the seventh consecutive monthly decline. What that indicates is that it’s not more people dining out, but rather those that do so are simply paying more for their checks. It’s rising prices, not rising customer counts, that are fueling the increase in comps, and that’s a worrisome trend for the industry. 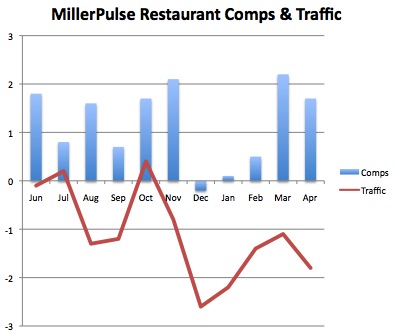 Particularly since the industry voice’s similarly focused MillerPulse survey shows equally troubling trends. While it’s comps data isn’t quite as rosy as that suggested by the Black Box report, and it hasn’t reported May numbers just yet, the traffic numbers tend to walk pretty much in stride together and there’s no heart-warming trend to be extrapolated either. In both cases, positive comps are more than offset by falling traffic numbers meaning the segments of the industry that have been hardest hit — fast food and casual dining — will likely continue to be so.

Shares of McDonald’s are up 7% year to date and more than 12% from their recent lows. Darden Restaurants is essentially unchanged since the beginning of the year and is 17% above its 52-week low. If the industry numbers are any indication, both chains could soon be testing the depths of their price charts once again in the near future.

Will this stock be your next multi-bagger?
Give us five minutes and we’ll show how you could own the best stock for 2014. Every year, The Motley Fool’s chief investment officer hand-picks one stock with outstanding potential. But it’s not just any run-of-the-mill company. It’s a stock perfectly positioned to cash in on one of the upcoming year’s most lucrative trends. Last year his pick skyrocketed 134%. And previous top picks have gained upwards of 908%, 1,252% and 1,303% over the subsequent years! Believe me, you don’t want to miss what could be his biggest winner yet! Just click here to download your free copy of “The Motley Fool’s Top Stock for 2014” today.