The 10 Most Expensive Weapons in the World 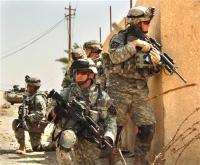 The 10 most expensive weapons systems in the world total $868 billion in research and development and manufacturing costs. The Department of Defense has commissioned each of the weapons. The White House recently released its strategic guidance, “Sustaining U.S. Global Leadership: Priorities for 21st Century Defense,” to address the upcoming $1 trillion defense budget cuts over the next decade. The costs of these expensive weapons systems illustrates the difficulty in cutting so much from the federal defense budget.

Read: The 10 Most Expensive Weapons in the World

To understand the magnitude of these weapons’ budgets, one only needs to look at the recent government initiatives aimed to save the economy. The $868 billion cost of the most expensive weapons in the world is much more than the $700 billion set aside by Congress as part of the TARP to salvage the nation’s massive financial system. It is also more than President Obama’s $787 billion stimulus package approved by Congress in February 2009.

The Pentagon breaks the costs of weapons into two categories. The first is research and development. The second is the actual costs to buy the weapons. Together, the two figures can be staggering. The total cost of the Virginia Class Submarine, for example, surpasses $83 billion. That entire amount has been and will be invested to launch only 30 of the weapons. All told, it is an extraordinary expense base to maintain America’s defense.

24/7 Wall St. reviewed the figures from the Department of Defense budget and provided by the General Accounting Office to find the 10 Most Expensive Weapons in the World.”