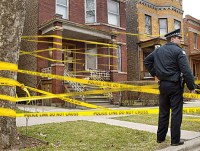 Today, the FBI announced that violent crime dropped 4% in 2011, compared to a 5.5% drop in 2010. Nationally, the murder rate fell 1.9% from 2010, and robbery, forcible rape and assault fell 4% each. However, among the cities with the highest violent crimes rates, the trend is not entirely positive.

A 24/7 Wall St. review of 2011 FBI crime data shows that violent crime rose in more than half of the cities that have among the highest rates in the country. In seven of the 10 cities, murder rates increased. In eight of the 10, burglary went up.

Read: The ten most dangerous cities in America

Strained budgets are forcing police layoffs that many cities cannot afford to make. More than half of local police departments that responded to a national survey reported cuts in the 2011 fiscal year, according to the Police Executive Research Forum, an organization of police executives from across the country. Many are cutting police forces through planned layoffs and attrition.

More than half of the cities with the highest violent crime rates are cutting law enforcement budgets and police forces as well. However, unlike the national picture, the situation is worse for these cities, which depend on tax bases that are shrinking faster than most.

The cities with the highest crime rates tend to have particularly high poverty rates, high unemployment and low median income. Two of the worst-off cities, Flint and Detroit, Mich., both have had well-publicized budget woes. Flint was taken over by an emergency city manager after failing to pay its bills in 2011. Detroit is facing similar budget problems and recently came to a temporary oversight agreement with the state.

While PERF notes that budget cuts appear to be slowing in police departments in the United States, most departments are still cutting. According to the group’s April report on local police budgets, this includes many of the cities on this list.

Oakland, Calif., cut its budget by 7% in the current fiscal year, with an additional 5% cut on the way, according to PERF. In the past two years, the city lost 80 police officers to layoffs and another 108 to attrition. This occurred despite increases in both violent and property crime in 2011.

Similarly, while the Detroit Police Department reported no cuts for fiscal year 2012, the city is planning a 15% cut next year. Detroit also has one of the highest crime rates in the country.

On its website, the FBI cautions against using crime data to compare city violence because rankings tend to be simplistic and ignore factors that influence crime, as well as the different ways crimes are measured and reported. “Data users should not rank locales because there are many factors that cause the nature and type of crime to vary from place to place,” the FBI warns.

Congressional Quarterly, which publishes and analyzes FBI crime statistics each year, referred to crime rate in terms of the “safest” and “most dangerous” cities. However, the publication recently dropped the terms “safe” and “dangerous” due to the concerns of criminologists, Dr. Rachel Boba Santos told 24/7 Wall St.

Despite these objections, Dr. Boba Santos said the data is useful to get a feel for the needs of a particular community and to look at a specific city’s trends on a year-over-year basis. She said the data also is used at the federal level to determine funding resources for different communities, comparing crime rates.

Read: The Most (and Least) Peaceful Countries in the World

Based on the FBI’s Uniform Crime Report, 24/7 Wall St. identified the 10 U.S. cities with populations of 100,000 or more with the highest rates of violent crime per 1,000 residents. Using the estimated populations and crime incidents from UCR, which measures incidents of eight types of violent and nonviolent crime for 2011, 24/7 Wall St. calculated the incidence of the four types of violent crime per 1,000 persons for that year: murder, forcible rape, robbery and aggravated assault. In addition to crime data, 24/7 Wall St. reviewed median income and poverty rates for these cities from the U.S. Census Bureau for 2010, the most recent available year. We also included average 2011 unemployment rates for these cities, provided by the Bureau of Labor Statistics.

These are the 10 cities with the highest rates of violent crime.