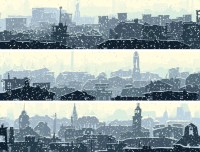 With nearly a month of winter left, 2015 is already the coldest winter since 1979. Cities as far south as Washington, D.C., have seen subzero temperatures while others have been ravaged by snow.

While extreme winters may be anomalous in some of these areas, many places in the United States experience extreme cold every year. Fairbanks, Alaska, for example, averaged Fahrenheit temperatures of nearly 17 degrees below zero between 1981 and 2010.

Severe cold is not confined to Alaska, however. Almost all of the coldest cities in the United States are located in the lower 48 states. Worcester, Mass., the “warmest” of these cities, only averaged winter temperatures of 16.8 degrees.

None of these cities are strangers to snow, with one-third historically receiving more than four feet. Marquette, Mich., one of the coldest cities, has historically averaged more than 12 feet of snow. In 2014, Marquette got nearly 350 inches of snow.

Even in the summer months, these cities do not get very hot. Average temperatures in more than half of these cities rarely rise above 60 degrees.

To determine the 50 coldest cities, 24/7 Wall St. used data on the minimum monthly temperature between 1981 and 2010 from the National Oceanic and Atmospheric Administration’s (NOAA) 2012 “Comparative Climatic Data” report. The cities listed have medium to large populations and are near weather stations classified as Local Climatological Data stations. Maximum monthly temperature and average annual snowfall come from the same NOAA report. We also used population data from the U.S. Census Bureau’s 2013 American Community Survey to ensure that each city list has at least 10,000 people. All temperatures are recorded in degrees Fahrenheit.

These are the coldest cities in America