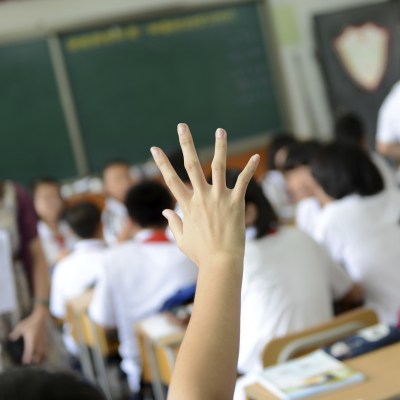 Source: Thinkstock
The United States offers some of the most expensive college educations in the world, and costs have risen to record highs. The College Board found that in the most recent academic year, higher education costs once again increased faster than the rate of inflation. Despite the rising costs, however, college enrollment has been increasing for decades in the United States. Over the 10 years through 2012, university attendance increased by 24%. And as of last year, more than 30% of American adults had a college education, up from the previous year.

Based on recently released educational attainment data from the U.S. Census Bureau, 24/7 Wall St. analyzed each state population’s level of higher education. Massachusetts again led the nation this year, with 41.2% of adults having attained at least a bachelor’s degree as of 2014. West Virginia, also unchanged from 2013, trailed every other state, with less than 20% of state adults reporting at least a college degree. These are the most and least educated states in America.

Click here to see the most and least educated states in America.

States with relatively high percentages of adults with a bachelor’s degree are almost always relatively wealthy states. Of the 15 states with the highest college attainment rates, only Kansas had a median household income that did not exceed the national median income of $53,657. On the other end of the spectrum, all of the 15 states with the lowest education levels except for Wyoming reported a lower median income than the national median.

Sterling Lloyd, senior researcher with national education newspaper Education Week, agreed this is not especially surprising. Not only do college-educated adults frequently have the skills necessary to obtain higher-paying jobs, but also companies tend to operate in areas where the workforce has suitable skills. In the 15 most educated states, with only four exceptions, the share of the state’s workforce employed in the traditionally high-paying professional, scientific, and management industry exceeded the corresponding national share of 11.1%.

A healthy economic environment is not just the consequence of a good education, Lloyd explained, but also often a precursor. In fact, the substantial resources necessary to attend college means residents of relatively wealthy states are more likely to attend college in the first place than residents of less wealthy states. As Lloyd said, “That’s why we see these disparities in education being so stubborn over time: It’s hard to move the needle.”

“I think most people would agree that if there is not enough funding there, it makes it harder for educators to have the resources that they need to serve students and to boost achievement. But it’s hard to decipher from the research exactly what the appropriate funding level is,” Lloyd explained.

To identify the level of college achievement in each of the 50 states, 24/7 Wall St. reviewed the percentage of adults in each state who had completed at least a bachelor’s degree from the U.S. Census Bureau’s 2014 American Community Survey (ACS). The median household income, high school attainment rate, poverty rate, the percentage of households relying on food stamps, as well as average earnings by education level also came from the ACS. We reviewed these data for both 2014 and 2013. School spending figures, which do not include private education spending, are as of the end of 2013 and came from the U.S. Census Bureau’s Survey of School System Finances.

These are the most and least educated states.