Professional Athletes Who Have Played for the Most Teams 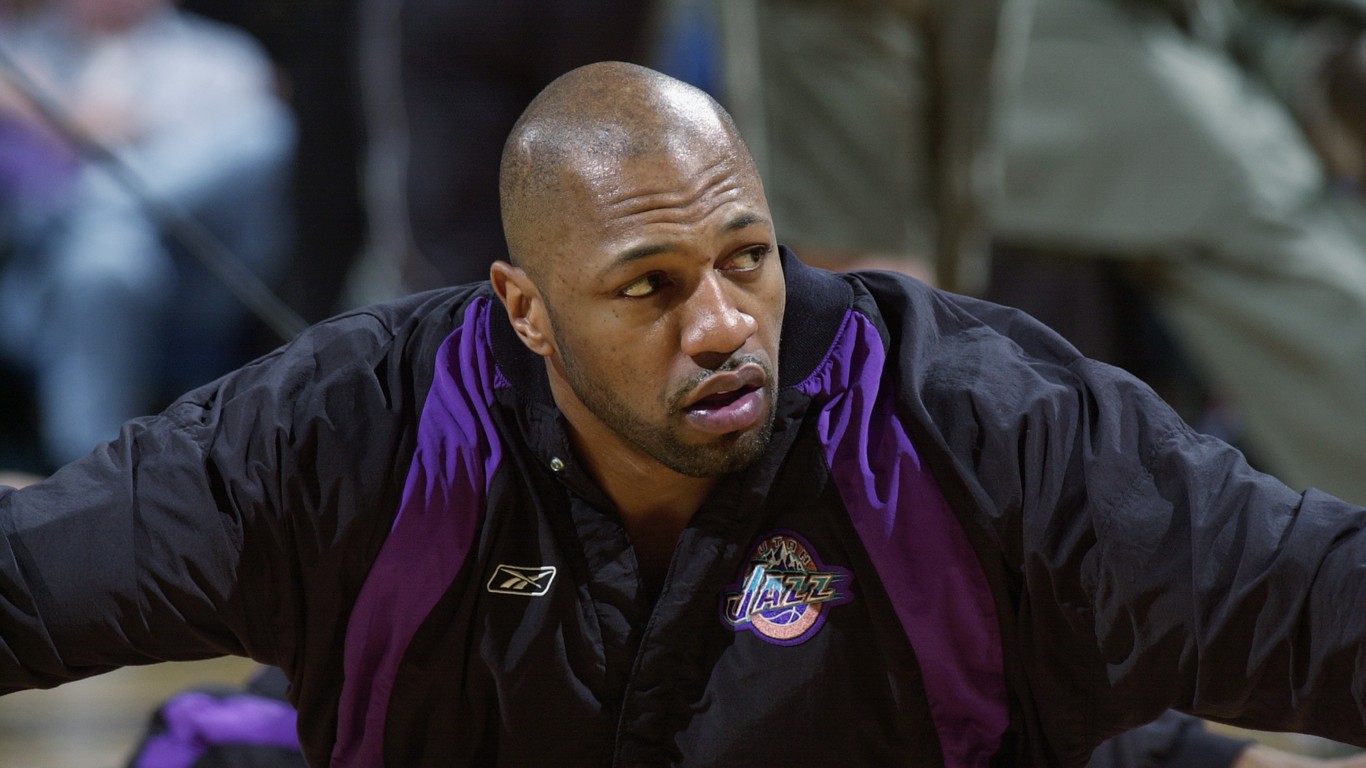 Power forward Tony Massenburg played for a dozen different NBA teams. His rookie year, the 1990-1991 season, was spent entirely with the San Antonio Spurs. The next season, he was waived and signed with the Charlotte Hornets, Boston Celtics, and Golden State Warriors. Massenburg spent his next two seasons playing in Spain before coming back to the U.S. to play for the Los Angeles Clippers.

After playing the 1994-1995 season in L.A., the newly-formed Toronto Raptors selected Massenburg in their expansion draft. He played 24 games in Canada before the Raptors traded him to the Philadelphia 76ers. Massenburg signed for the New Jersey Nets ahead of the 1996 season and then for the Boston Celtics for 1997 and was traded to the Vancouver Grizzlies mid-season. In 1999, the Grizzlies traded Massenburg back to Houston for the rest of the season, then he signed a free agent deal with Vancouver once again in 2000, playing with the team through their move to Memhpis through the 2001-2002 season. After that, Massenburg signed one-year deals with the Utah Jazz, Sacramento Kings, and back to his original team the San Antonio Spurs, helping the team win the 2005 NBA Championship before retiring. 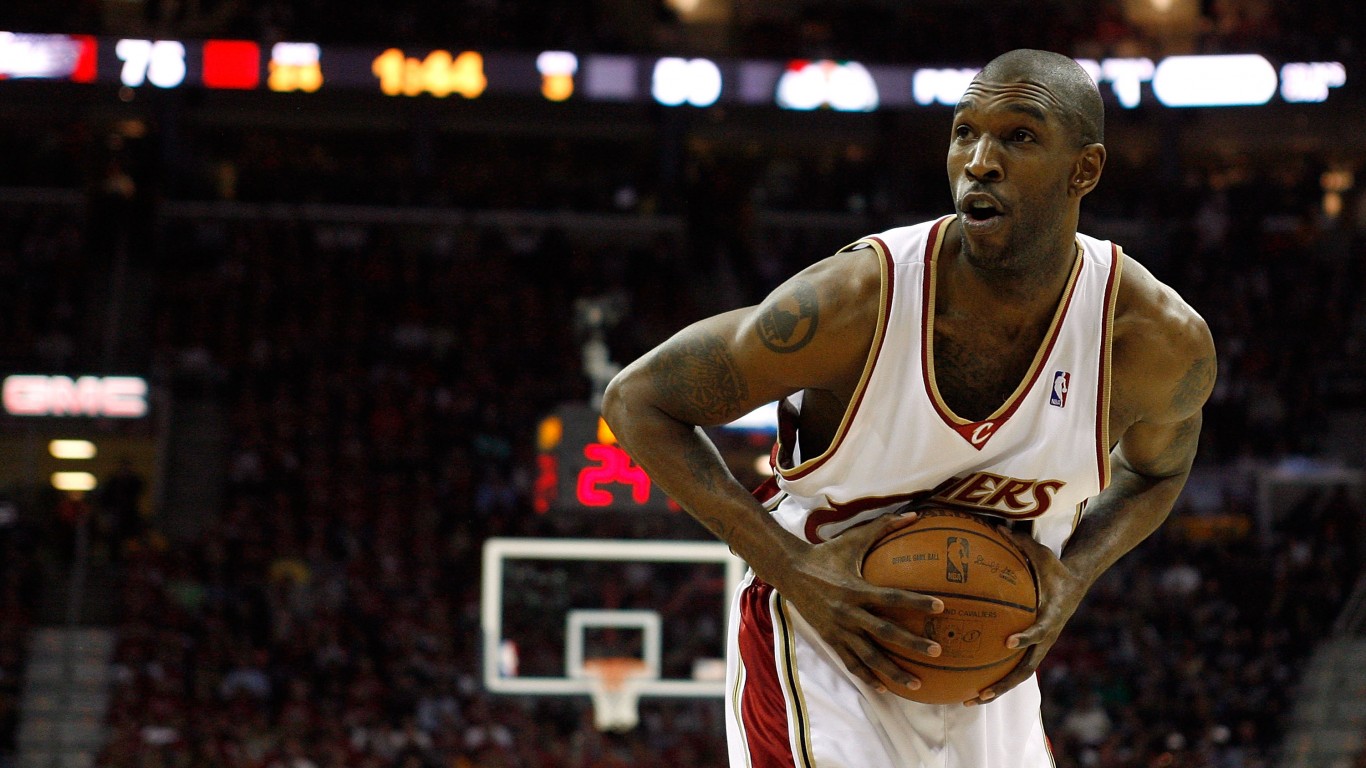 Joe Smith was drafted first overall in the 1995 NBA Draft by the Golden State Warriors. He made the all-rookie team and averaged 17.0 points per game in his two-and-a-half seasons with the Warriors. In early 1998, Smith was traded to the Philadelphia 76ers for the rest of the season. He signed with the Minnesota Timberwolves, where he played two seasons before signing a one-year deal with the Detroit Pistons, then returned to Minnesota for two more years. The T-Wolves traded Smith to the Milwaukee Bucks after the 2002-2003 season, where he remained for three seasons.

After being traded to the Denver Nuggets ahead of the 2006-2007 season, Smith bounced around for the remainder of his career, never staying with one team for more than a season. He played for the Denver Nuggets, Philadelphia 76ers, Chicago Bulls, Cleveland Cavaliers, Oklahoma City Thunder, Atlanta Hawks, New Jersey Nets, and Los Angeles Lakers. He retired after the 2010-2011 season.

24/7 Wall St.
Sports Records That May Never Be Broken 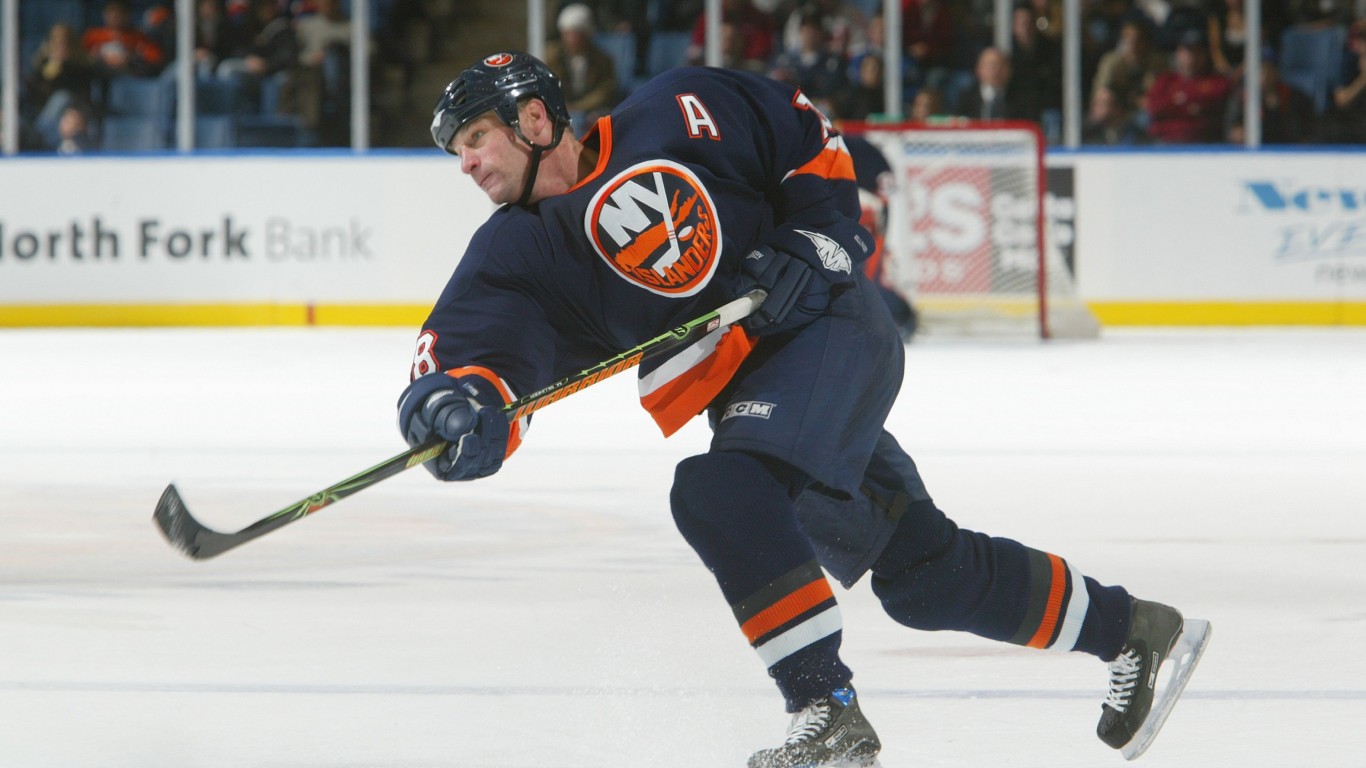 Mike Sillinger played for more teams than any player in NHL history, suiting up for a dozen franchises. The center began his career in 1990 for the Detroit Red Wings before being traded to the Mighty Ducks of Anaheim in 1995. From 1996-2001, Sillinger was traded five times — from Anaheim to the Vancouver Canucks, then to the Philadelphia Flyers, Tampa Bay Lightning, Florida Panthers, and the Ottawa Senators. Ahead of the 2001-2002 season, Sillinger signed a deal with the Columbus Blue Jackets, playing there for two full seasons.

After the 2002-2003 season, Sillinger was on the move again. Columbus traded him to the Dallas Stars, who flipped him that same day to the Phoenix Coyotes. He was again traded to the St. Louis Blues, who in turn traded him to the Nashville Predators. Sillinger finally got some stability at the end of his career, signing with the New York Islanders ahead of the 2006-2007 season. He played with the Islanders for three full seasons before retiring. 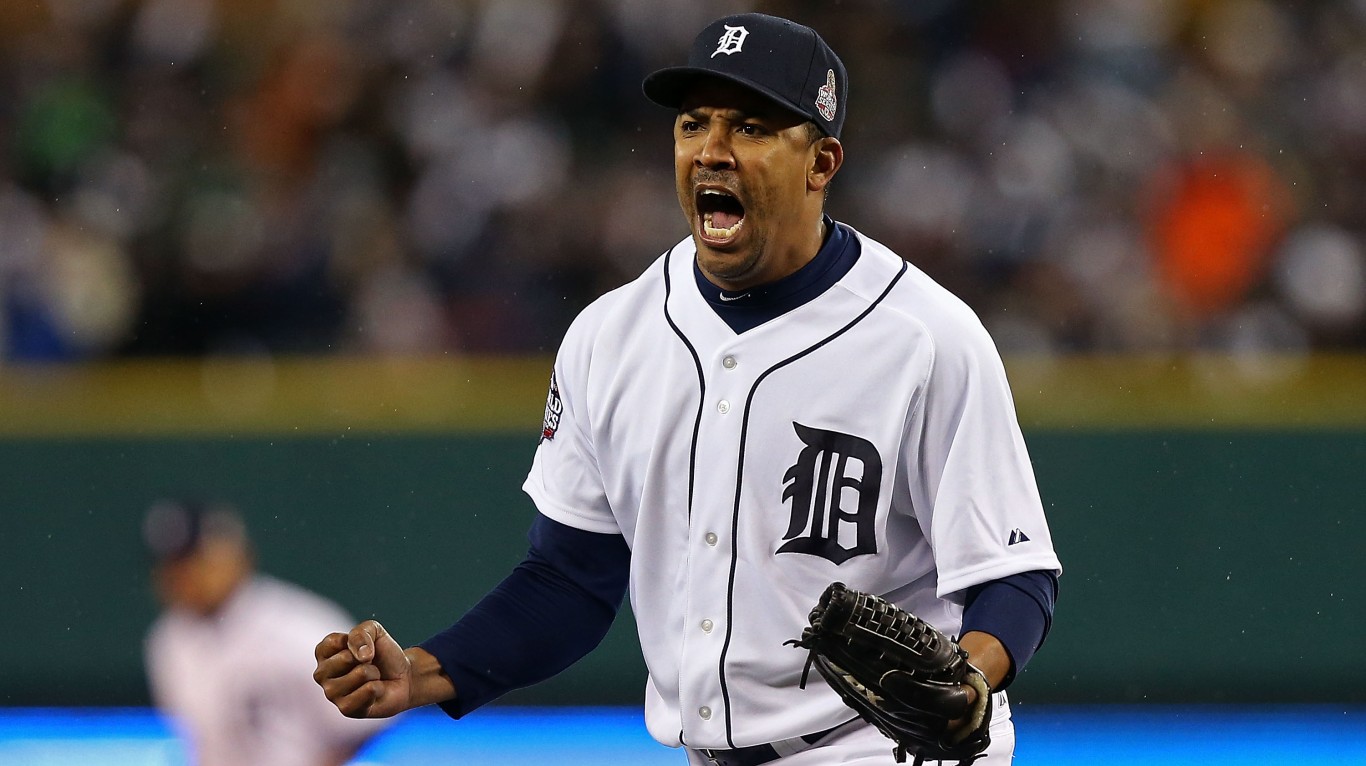 After spending his rookie season with the New York Mets in 1999, relief pitcher Octavio Dotel was traded to the Houston Astros, where he pitched for more than four seasons — his longest stretch with any team. In 2004, the Astros traded Dotel to the Oakland A’s. In 2005, Dotel injured his arm and needed Tommy John surgery, returning to the big leagues in August 2006, after signing with the New York Yankees.

Dotel began the 2007 season with the Kansas City Royals before being traded to the Atlanta Braves. He then spent the 2008 and 2009 seasons with the Chicago White Sox, posting a 3.55 ERA in 134 appearances. He split his 2010 season between the Pittsburgh Pirates, Los Angeles Dodgers, and Colorado Rockies, and his 2011 season between the Toronto Blue Jays and the St. Louis Cardinals. Dotel was a crucial piece of that Cardinals 2011 World Series team, appearing in 12 postseason games. Ahead of the 2012 season, he signed as a free agent with his 13th and final team — the Detroit Tigers. Dotel returned to Detroit for the 2013 season, but he missed significant time with injury and retired in 2014. 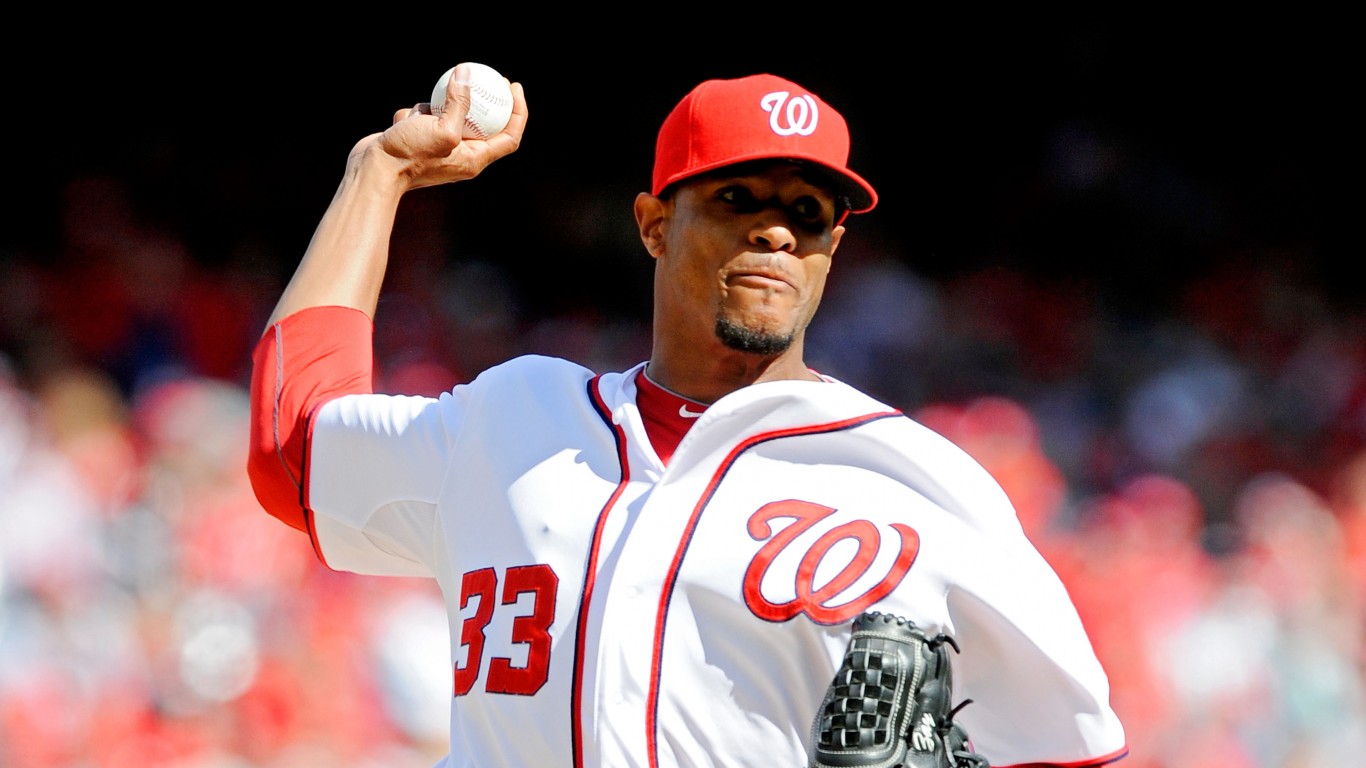 No professional athlete in the modern history of the NFL, NHL, NBA, or MLB played for as many teams as Edwin Jackson, at 14. The pitcher made his MLB debut for the Los Angeles Dodgers in 2003 at just 19 years old. In 2006, he was traded to the Tampa Bay Devil Rays, where he also spent three seasons. Jackson was traded to the Detroit Tigers ahead of the 2009 season. There, he made his lone All-Star game, going 13-9 with a 3.62 ERA.

After the season, he was traded four times in 20 months, going from the Arizona Diamondbacks to the Chicago White Sox to the Toronto Blue Jays to the St. Louis Cardinals, where he was part of their 2011 World Series-winning team. Beginning in 2012, Jackson signed a string of free agent deals, playing for the Washington Nationals, Chicago Cubs, Atlanta Braves, Miami Marlins, San Diego Padres, Baltimore Orioles, Washington again, the Oakland A’s, a second stint in Toronto, and finally back to Detroit for a few games in 2019 to round out his career.