CenturyLink Inc. (NYSE: CTL) has been one of the more controversial communications stocks over time because of its super-high dividend yield. CenturyLink comes with better than a 9% current dividend yield, and some investors have wondered just how sustainable that $1.00 per share payout will be in hard times. Now CenturyLink is trying a new twist for itself with a name change and rebranding to Lumen Technologies.

While name changes are not really anything new, the release concerning Lumen also noted that the company has a bold new purpose. According to its press release, the new rebranded company will help “lead enterprises through the challenges and opportunities of the 4th Industrial Revolution – a time when smart, connective devices are everywhere.” The release also indicates that Lumen “brings a new focus to how it views the marketplace and the world with the purpose to further human progress through technology.”

This move might make sense to some investors. To others, it may seem like a street game of three-card monte.

CenturyLink is no stranger to growing its operations and making acquisitions that involve multiple names over time. The company acquired Level 3 Communications back in 2017 that gave the company (by its own press release) a pro forma revenue of $24 billion for the trailing 12 months ending June 30, 2017. CenturyLink’s annual revenues were $23.4 billion in 2018 and $22.4 billion at the end of 2019. The current Refinitiv consensus analyst targets call for revenues of $20.65 billion in 2020 and $20 billion in 2021.

If this is such a major directional change, perhaps there would be more changes to the long-term corporate outlook. That’s not the case here. CenturyLink’s press release stated:

The company does not intend to change its financial strategy or financial reporting as a result of this announcement. Effective with the opening of the trading day on Sept. 18, 2020, the company stock ticker will change from ‘CTL’ to ‘LUMN.’

CenturyLink has sold some of the assets that came with the Level 3 acquisition, but the company has a history of making smaller acquisitions. Some of the smaller purchases in recent years included the following: SEAL Consulting (SAP solutions), netAura (security services), ElasticBox (multi-cloud application management services), Orchestrate (database-as-a-service) and DataGarden (disaster recovery.

CenturyLink already has changed its name over time. CenturyLink agreed to acquire Qwest Communications a decade ago, and Qwest dates back to the 1980s break-up of the old AT&T into the regional Bells via a Qwest merger with U.S. West. In 2009, the old CenturyTel acquired Embarq Corporation in a tax-free stock merger to create another one of the top U.S. communications companies, along with a revamped name of CenturyLink.

Our people are dedicated to furthering human progress through technology. Lumen is all about enabling the amazing potential of our customers, by utilizing our technology platform, our people, and our relationships with customers and partners.

Lumen’s press release also talks up many of the buzzwords around the 4th Industrial Revolution: smart cities, retail and industrial robotics, real-time virtual collaboration, automated factories, high-performance networking and security, a highly interconnected global fiber network infrastructure, edge cloud capabilities and so on. This begs the question whether most of those aren’t targeted already.

In all fairness to the company, and to offer up both sides of a story here, a Denver Post article on the Lumen rebranding does specify that the move highlights a push to offer more digital services directly to large customers. That article noted that the new name and brand is the result of a bunch of small acquisitions rather than being due to one large acquisition. Denver is a key hub for CenturyLink/Lumen, and the company has roughly 5,800 of its 40,000 employees based there.

Another report from News Star in Monroe, Louisiana, where CenturyLink is based, shows that the headquarters will remain in Monroe. Roughly 1,800 of its 40,000 employees are based in Louisiana.

If things were going to be vastly different, perhaps investors could have expected an update to guidance. CenturyLink’s stock was above $40 back in 2010 to 2012, and while it got back to $40 briefly in 2014, the trajectory of the shares has been lower in the years since. It’s now a $10.85 stock, with a 52-week trading range of $8.16 to $15.30, and the reaction to the name change and rebranding was rewarded with a two-cent drop in the shares as of midday trading. Refinitiv’s consensus target price was last seen at $9.66.

The reasoning of some name changes and rebranding efforts are very obvious. Whether this effort is as obvious is up to the company to prove going forward.

A 10-year stock chart from BigCharts.com has been provided below. 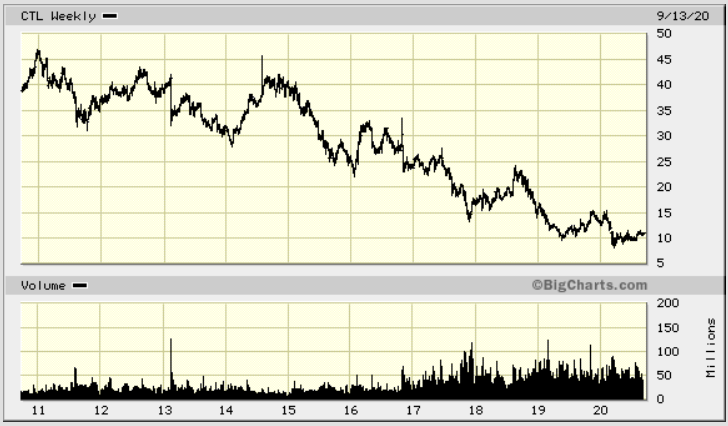