Nearly three years ago, in February of 2014, Boeing Co. (NYSE: BA) filed documents with the Federal Communication Commission (FCC) describing a smartphone the company was developing. The device, dubbed the Boeing Black, was intended to be used as a means of secure communication between governmental agencies and their contractors working on matters related to national security and defense.

According to a report in Defense One on Monday, the Boeing Black is now loose in the wild and being tested by at least some of the military’s top brass. Cyber Command chief, Admiral Michael Rogers, has one, the head of the Defense Information Systems Agency, Lt. General Alan Lynn, told Patrick Tucker of Defense One.

Early details of the phone indicated that it would use the Android operating system from Alphabet Inc. (NASDAQ: GOOGL) and that its dual sim cards would support GSM, WCDMA and LTE protocols. The FCC filing also revealed that the Black would have an HDMI port, USB, Wi-Fi and Bluetooth capability. 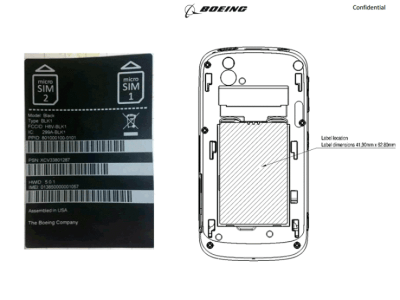 The dual-sim arrangement would allow the user to have access to the internet for non-secure use and prohibit internet access to the secure government networks like the super-secret Joint Worldwide Intelligence Communications System (JWICS). The only way for the user to reach JWICS is through a secure connection.

According to General Lynn, the device uses “a large amount of encryption” and “nothing lives on the device.” It is much like a virtual desktop. That means that the Boeing Black acts like a dumb terminal once it connects to a secure server where all the work is done and the only thing the user controls are input signals (keyboard, mouse) to the server. Even if the Black is stolen or lost, the device has no secrets to give up.

And if someone tries to get at the guts of the device, this is what happens according to Boeing’s 2014 filing:

There are no serviceable parts on Boeing’s Black phone and any attempted servicing or replacing of parts would destroy the product. The Boeing Black phone is manufactured as a sealed device both with epoxy around the casing and with screws, the heads of which are covered with tamper proof covering to identify attempted disassembly. Any attempt to break open the casing of the device would trigger functions that would delete the data and software contained within the device and make the device inoperable.

Boeing is not the only potential provider of secure smartphones for military and government use. A company named Silent Circle, founded by Philip Zimmermann the creator of email encryption program Pretty Good Privacy (PGP), also has test units in the hands of some military users, according the Tucker.