Source: Thinkstock
The U.S. Federal Highway Administration (FHWA) has just released its traffic volume data for the month of February. The agency estimates that travel on all roads and streets in the United States rose by 2.8% year-over-year to a total of 221.1 billion vehicle miles. On a nominal basis, the 12-month moving average is at an all-time high of nearly 3.05 trillion miles driven.

Lower gasoline prices certainly played a role in the increase in miles driven. The average price for a gallon of regular gasoline in February was $2.22, according the U.S. Energy Information Administration, a full $1.14 per gallon less than the price in February of 2014.

The number of miles U.S. drivers have logged over the past seven years has been stagnant (see graph below). The impact of the Great Recession, with its high levels of unemployment and low levels of wage growth, surely played a significant role. There also has been a demographic shift, with fewer younger drivers — who tend to drive more — and more older drivers, who tend to drive less.

ALSO READ: The States With the Most Deadly Accidents

When the FHWA data are adjusted for population, the month that posted peak number of miles driven is June 2005. On that basis, miles driven in February are still about 5.7% below the peak. 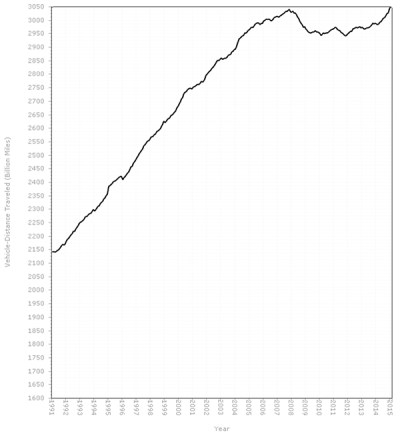