The States With the Most Deadly Accidents 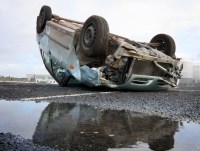 Source: Thinkstock
There were 130,557 accidental deaths in the United States in 2013. Some types of accidental deaths are more common than others. Drug poisonings and motor vehicle accidents were the two leading causes of unintentional deaths.

Click here to see the states with the most deadly accidents.

Motor vehicle accidents were the leading cause of accidental death in 18 states. Some of these states had relatively lax motor vehicle regulations. Montana, for example, does not require periodic vehicle safety inspections, which would keep less safe vehicles off the road. Mississippi, like just a few other states, does not use a point system to monitor driver records. This may allow dangerous drivers to stay on the road longer than they would in states that use such a system.

In another 25 states, poisoning was the leading cause of accidental deaths, the vast majority of which were drug-related. Drug use, including prescription drugs, was quite common in many of these states. The proportion of residents reporting near-daily use of mind-altering drugs to relax exceeded the national average of 18.9% in six of the top 10 states for accidental deaths.

Another leading cause of accidental death was falls. While it is unclear why some states reported higher rates of deaths from falling than others, the eight states that reported falls as the leading cause of accidental death included some of the most mountainous states in the country: Vermont, New Hampshire, Colorado, and Oregon. None of those states were within the 10 states with the highest death rate.

To identify the states with the most deadly accidents, 24/7 Wall St. reviewed the age-adjusted accidental death rate in each state in 2013 from the CDC. Nominal figures and age-adjusted rates by cause of accidental death also came from the CDC. The age-adjusted death rate is used to allow for comparisons of relative mortality risks across groups and over time. We also looked at the percentage of a state’s population reporting near-daily mind-altering drug use in 2014 from Gallup’s most recent Healthways Well-Being Index. Violent crimes per 100,000 people and drug abuse violations in 2013 came from the Federal Bureau of Investigation (FBI). We also considered educational attainment rates, the percentage of people with no health insurance, and household median income from the U.S. Census Bureau’s American Community Survey (ACS). Unemployment rates for 2013 came from the Bureau of Labor Statistics.

These are the states with the most deadly accidents.