Since mid-November, the market cap of Tesla Inc. (NASDAQ: TSLA) has risen from around $382.4 billion to around $615 billion as of Monday’s closing bell. That’s an increase of around 60%. Among other automakers listed on U.S. exchanges, the best performer was Honda Motor Co. Ltd. (NYSE: HMC), which has posted a gain of nearly 18% over the same period.

The question on everyone’s lips is some version of “Can this be real?” Tesla’s revenue for the past 12 months totals $28 billion. Honda’s totals nearly $125 billion, while Toyota Motor Corp. (NYSE: TM), the world’s second-largest carmaker by market cap, posted 12-month revenue of nearly $250 billion.

The following chart, from Axios, shows how Tesla’s market cap of $615 billion is larger than that of the world’s seven largest automakers combined. 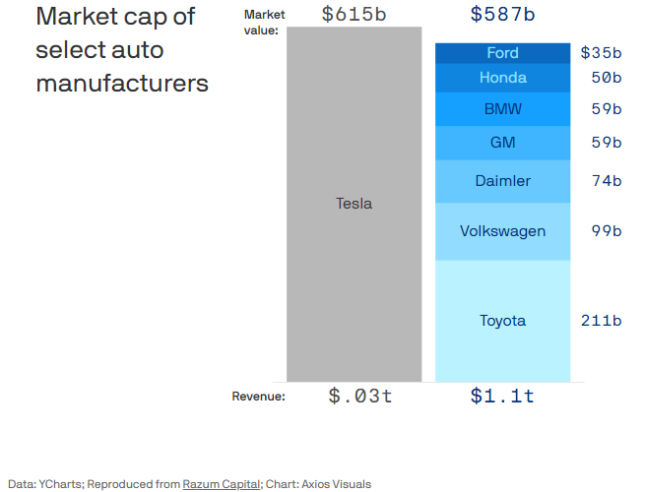 Tesla’s share price has been driven by the overall liquidity in equity markets, and there appears to be little connection between the equity markets and the real world. In the real world, GDP growth is expected to be negative this year. The International Monetary Fund (IMF) is forecasting a 4.4% year-over-year decline in global gross domestic product and a U.S. decline of 4.3%.

Partly the disconnect between Tesla and the real world is due to the fact that some investors and analysts see the company as an automaker while many more see it as a technology company. Automakers build real stuff that shrinks operating margins; tech companies often don’t have that problem.

Morgan Stanley’s auto industry analyst Adam Jonas notes that “Tesla is a car company in the way Apple is a phone company.” What that means is that Tesla is building (or at least attempting to) an ecosystem like Apple’s where the company’s products (its cars, trucks, software and services) are so tightly-integrated that once customers have bought in, they’ll stay there for a long time.

Are Huge Q4 Deliveries Setting Up Tesla for a Big 2022?