No QE3 Commitment From Ben Bernanke 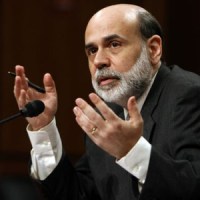 Federal Reserve Chairman Ben Bernanke is testifying before the Joint Economic Committee at Congress today and Mr. Bernanke is not exactly committing to any further quantitative easing or QE3.  He did, however, mention that the situation in Europe poses significant risks to the U.S. and that the Fed remains prepared to act if the crisis spreads.

Bernanke blamed the weather on the jobs report, an interesting take that many have claimed along the way.  He noted, “This apparent slowing in the labor market may have been exaggerated by issues related to seasonal adjustment and the unusually warm weather this past winter… But it may also be the case that the larger gains seen late last year and early this year were associated with some catch-up in hiring on the part of employers who had pared their workforces aggressively during and just after the recession.”

Bernanke is calling for moderate growth as being “poised to continue at a moderate pace over coming quarters” with an accommodative monetary policy, increases in household spending having been relatively well sustained, with income growth having remained quite modest.

The full testimony is here.

UBS Says Financial Technology Could Be Huge in 2021: 4 Stocks to Buy Now