Is There a New Greek Bank Nationalization Risk After IMF News?

Greek depositors know that their government could simply seize the banks. If so, there is no assurance that their deposits would be made whole. If you will recall, this took place in Cyprus. NBG is the only Greek bank that trades in the United States’ major equity exchanges.

The situation in Greece is still quite laughable. The socialists are playing a game, and the Europeans are letting them play it. Maybe what really needs to be asked is how you repossess or take collateral from a nation.

Is there a real nationalization risk here? Well, the answer is an open question. We will see.

Below is a snapshot of a Google search result (click image to enlarge) with the term “risk of Greece nationalizing banks” and we will let you be the judge. 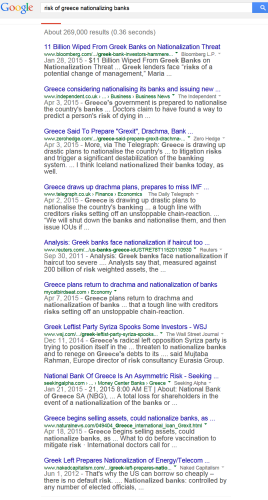