Gold Faces Critical Chart Set Up Into End of February

It sometimes feels strange when stocks, oil, gold and other assets rise without a big sell-off in bond prices for higher bond yields. That being said, the price of gold often moves with currencies more than it does with other markets. It is just crucial to keep in mind that gold can act independently versus other commodities. After all, gold is sought after in times of uncertainty as it is generally considered to be the ultimate safety trade.

On February 23, 2017, gold has reached a crucial chart pivot point that is getting rather hard to ignore. While this is not a directional call, gold has challenged the $1,250.00 mark, and this is touching what were crucial pivot points that acted as a temporary floor two times in 2016.

True technicians claim that they do not pay attention to the daily news flows. That being said, we have seen over and over that financial markets do not really act as efficiently as the efficient market theory your college finance professor would like you to believe in. The reasons that markets are not efficient may be different from time to time, and maybe it’s because too many people have put too much faith in the fictional polls the media believed were foregone conclusions.

Dennis Gartman appeared on CNBC on Wednesday with a rather unusually bullish gold call. Gartman was bullish on oil prices, but his unusual gold call was that he is very bullish for the shiny yellow metal in euro and yen terms. A weaker dollar generally makes gold cheaper for holders of other currencies.

Some continued unease over European and U.S. politics seems to be supporting gold demand. Gold is being treated as a safe haven asset again, but the prospects (or hope) of rising interest rates may be keeping a lid on gold prices getting too far out of hand. Maybe.

What had been for gold a trading range of about $1,220 to $1,240 since early February has now been violated. Thomson Reuters has a piece out showing that the firm’s technical analyst, Wang Tao, has said gold is likely to break above that trading band for upward momentum.

As goes the price of gold, so goes the price of the SPDR Gold Shares (NYSEMKT: GLD). This has a 0.4% annualized expense ratio, and the SPDR Gold Shares is easily ranked as the largest physically backed gold exchange traded fund (ETF) in the world. The most recent data from the State Street SPDR site shows that the top gold ETF holds 841.17 tonnes of gold, or 27,044,414.4 ounces of gold. That was shown to be a current value of more than $33.7 billion.

Bloomberg has pointed out the Direxion Daily Junior Gold Miners Index Bull 3x Shares (NYSEMKT: JNUG) having almost tripled in the past two months. It also has shown how the number of shares trading has gone up by about four times so far in 2017. With shares last seen up 4% at $11.42, the 52-week trading range is $3.77 to $33.29. Needless to say, this one is volatile.

Investors seeking refuge from political uncertainty in the U.S. and Europe have piled into gold in recent weeks, its appeal further buoyed by a perception that the Federal Reserve would be slow to raise borrowing costs.

More important gold news has been seen as follows:

Be advised that this is not a directional call on gold. Still, the current chart levels simply cannot be ignored. 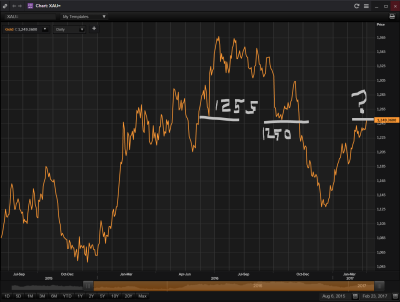