The summer of 2017 promises to be wetter and cooler in some parts of the Lower 48 states, dry and hot in others, with a threat of rampant wildfires in California. The forecast was released on Thursday by AccuWeather.

In the heavily populated northeastern and middle Atlantic states, thunderstorms in June and July are expected to keep prolonged high heat in check. It wouldn’t be summer without hot weather, of course, but AccuWeather forecaster Paul Pastelok thinks it will not be as pervasive as last year.

Pastelok thinks northeastern cities like Boston and New York may have somewhat more 90-degree days than usual but he does not expect there to be as many as last year. He noted that areas farther south along the Atlantic coast may experience temperatures at or slightly below normal due to wetter weather over the summer.

In the southeastern states, fire threats remain high unless a big tropical storm forms early, an unlikely prospect according to Pastelok. Water temperatures are already running higher than usual from Charleston, South Carolina, north to Cape Hatteras, suggesting severe weather in the Carolinas in June.

Hot, dry conditions are expected in the northern Plains states and could threaten the region with mild or moderate drought.

The heavy snow that piled up in California this past winter is expected to lead to increased vegetation that could serve as fuel for wildfires once the weather turns hot and dry. Temperatures are forecast to rise “significantly” in July, heightening risks of fire.

The Pacific northwest can expect showers and thunderstorms at times in June, with severe weather possible across the interior as far as Spokane and Boise. 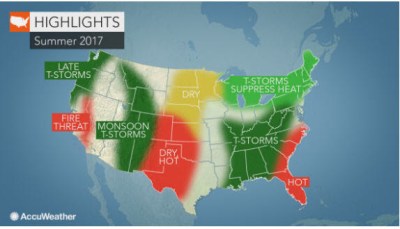