Since 1957, a device routinely used to measure the amount of plankton in the North Atlantic Ocean has been towed more than 6.5 million nautical miles on 16,725 trips. On more than a third of those trips, the device was fouled, and plastics were the cause of the fouling in 4% (669) of those trips.

In just the first two decades of the 21st century, the number of times the plankton recorder has become entangled in plastic junk has increased by 10 times. Eight years passed between 1957, when the first incident involving plastic entanglement was reported, and 1965, when the second was recorded. In the first, a piece of fishing trawl line was the culprit. In the second, a plastic bag, the first recorded instance of a specific type of plastic.

That first plastic bag entanglement in 1965 falls within “the same decade as the first known recordings of plastic entanglement and ingestion by seabirds and marine turtles which were observed in the late 1960s,” according to research reported Tuesday in Nature magazine by a team of researchers who combed through a database dating back to 1957 that included comments on the towed trips of the plankton recorder. The logged data, originally intended to record plankton levels in the ocean, was searched for terms associated with man-made products.

More than half (55%) of the recorded entanglements were related to fishing gear. Because most of the towing trips occurred in the fishing waters of the North Sea and the North Atlantic, this was not unexpected. The researchers noted, “The increase in fishing related plastic entanglements, particularly in the North Sea region, contributed most significantly to the increase seen in macroplastic [plastic pieces greater than 5mm in size] entanglements in the last 2 decades.”

What may have been unexpected is evidence that entanglements with plastic bags have declined since 2000. A similarity percentage analysis of the data “determined that the percentage contribution between the litter types to the change in macroplastic counts over time were 44.86% due to fishing related plastics, 44.67% due to other (fishing not specified) plastic types, and 10.48% due to plastic bags.” 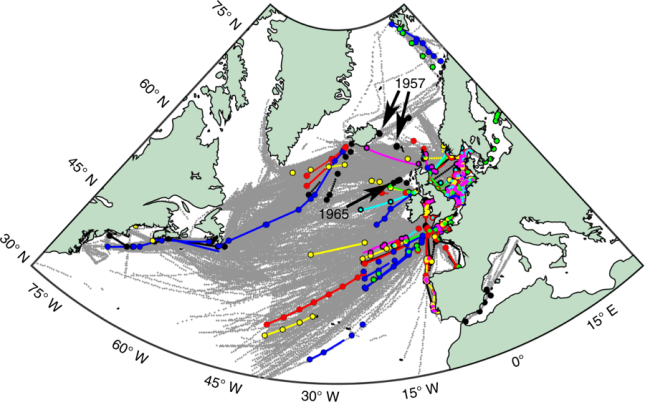 The research confirms the “expected significant increase in plastics in the open ocean since the 1990s.” The researchers also commented that larger macroplastics break down to form smaller microplastics (less than 5mm) and “therefore they have the potential to be a proxy for a wide range of plastic sizes within the oceans.” Some nations contribute more to the plastics garbage in the oceans than others. These are the countries that produce the most waste.