Beginning late in August, two coal mining stocks have added around 60% to their share prices. Arch Coal Inc. (NYSE: ARCH) and Peabody Energy Co. (NYSE: BTU) have jumped by 64% and 58%, respectively, since August 20.

The higher share prices reflect higher prices for natural gas and, coincidentally, rising demand for coal in the electric power sector. In its most recent Short-term Energy Outlook, the U.S. Energy Information Administration (EIA) estimates that natural-gas-fired electricity generation will increase from 37% in 2019 to 39% this year, before dropping to 34% in 2021.

S&P Global Platts Analytics estimates that demand for coal already has increased and will rise more in the remaining months of 2020. The rising demand for electricity is expected to drive demand for coal higher by 5 million to 15 million tons, compared to demand for the last three months of 2019. In a blog post, the analysts wrote: “By the end of the year, the continued gas-to-coal switching and overall market improvements are expected to drive monthly coal consumption above 2019 levels.” 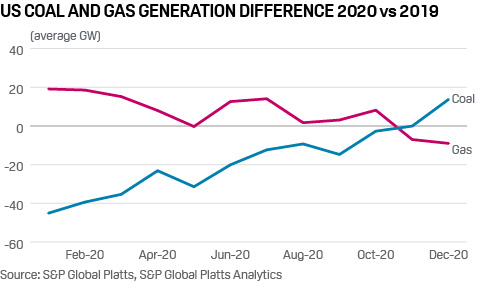 A corollary of increased demand is a drawdown in thermal coal stockpiles that also supports “a more bullish view for coal production.” Platts Analytics expects U.S. stockpiles to drop to around 120 million tons by the end of September, down from a recent peak of 154 million tons. By year’s end, coal stockpiles are expected to total around 129 million tons, about where they started the year.

When Arch Coal reported second-quarter results in late July, CEO Paul Lang said the company expected solid performance from its metallurgical coal business and that “higher volume levels and ongoing cost control efforts should lead to an improved financial performance from our legacy thermal assets in the second half of 2020.”

Peabody Energy wrote down $1.42 billion in the value of its North Antelope Rochelle Mine in Wyoming citing “lower long-term natural gas prices, timing of coal plant retirements and continued growth from renewable generation.” The company also said coal’s share of U.S. electricity generation “will continue to be lower than prior year levels.” That the company was wrong, at least in the short run, must be a welcome surprise.

The VanEck Vectors Coal ETF (NYSEARCA: KOL) has added just 5.6% to its share price since August 20. Even at that, however, the improvement is much better than the 2.4% decline in the S&P 500 in the same period.

U.S. electricity generation from renewable fuels accounted for about 17.5% of the nation’s generation in 2019. More than a third of that (6.6%) came from hydropower. EIA data for 2019 also shows nuclear generation accounted for 19.7% of all U.S. power generation.

Looking ahead, S&P Global Market Intelligence’s Power Forecast projects that 100 gigawatts of solar and wind generation will need to be installed between now and 2030 just to keep pace with rising state-level renewable portfolio requirements and that renewable solar and wind projects already in the pipeline could add another 100 gigawatts to the total.

Coal-fired generation has declined by 62 gigawatts since 2014, and one estimate sees about 27 gigawatts being retired by 2025.