Is This Becoming the Second Worst Oil Chart of the Modern Era?

Source: Thinkstock
Finding a bottom in the price of oil has become an elusive game of cat and mouse — or maybe a game of dollars versus logic. What is amazing to see is the absolute flush out that is taking place in the companies that win and lose with the fortunes of oil and gas. With many oil stocks down 30%, 40% or even over 50% from their highs, 24/7 Wall St. wanted to see what exactly this flush looks like — and hopefully try to figure where a bottom could be, assuming that bottom is “lower.”

The International Energy Agency (IEA) recently lowered its 2015 estimate for oil demand growth by 300,000 barrels per day (down from 1.1 million prior) to 93.5 million. With demand said to be waning, we are rounding the daily global oil demand down to 90 million barrels or so and use the current $60 handle as the price for a floor level (if this is a floor of course) — knowing that oil prices globally fluctuate from the at-the-market level from West Texas Intermediate crude — you get a global daily oil marketplace value of $5.4 billion.

Comparing the daily value of stocks traded is not a typical way to evaluate a stock. First off, machines trade much of the volume. More dollars are traded in many key bank stocks and technology stocks that the key companies do in daily revenues as well. Still, when we are looking for an extreme to see where a bottom could be in oil — still looks and acts lower presumably — any and every tool has to come out of the box to see what we are really looking at.

ALSO READ: The 5 Most Shorted Stocks on the New York Stock Exchange

So, if we tally up the average daily volume of the stock value alone as follows, with rounding to nearest levels of course, we evaluated 10 top stocks with their daily trading volumes on NYSE (see on page 2), and the value of just these stocks comes to $5.1 billion per day. Again, the effort here is not to try to use the equity volume and dollars traded around the stocks as a barometer.

Now let’s look at the chart on front month oil from Barcharts.com (see below) that goes back 25 years. This current trend is simply becoming the second worst downdraft we have seen in a generation. The only time it was worse was the 2008 oil bubble bursting, which was right in the middle of the economic meltdown during the Great Recession.

Does this chart signal a bottom down close to $50? Or does it get a tad worse? For things to get worse than $50, one might have to assume that the next leg of the global downturn is imminent. Or so logic might dictate. Using a chart alone is hard to do for fundamental investors, but something is happening now that will remain static:

Now think about the financial side of the trade when oil began skyrocketing in 2007 and well into 2008. The same argument that took oil up each day — from $90 to $100, and $100 to $110, and $110 to $120, and $120 to over $140 — it was the same rationale used for the argument every single day. A shortfall of production versus demand was the common discussion, but there was never really a single net delivery miss anywhere in the world. Not once was there a series of oil tankers that arrived at port to find that there was no oil to load. What really drove that price up endlessly was that the flow of money simply took over the actual market.

What seems obvious this time around is that the financial side of the trade has again completely overtaken the fundamentals of supply and demand. To the downside that is. That being said, this downward move looks and feels like the inverse of what happened from 2007 to 2008. When it ends is of course a guess, as is at what price the floor occurs. The raw dollars involved are far more active than the fundamentals in the pricing side of the equation right now. 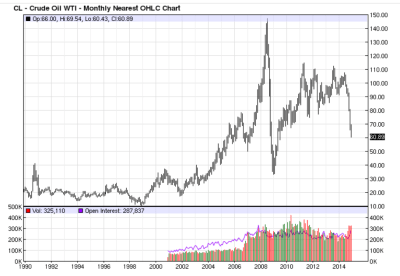