Are US Crude Oil Storage Tanks About to Overflow? 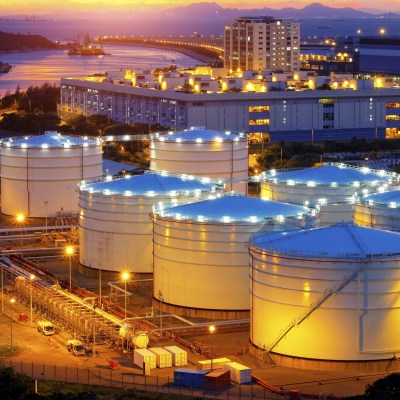 Not hardly. According to the EIA, total U.S. crude oil storage capacity totals around 521 million barrels. Of the total that the agency reports as storage, however, are approximately 120 million barrels of “storage” in pipelines, on ships or in local tanks that hold crude from low-producing wells. Thus, the actual remaining capacity in working storage tanks is closer to 140 million barrels.

Also look at the rate of gain. Since March 6, 2015, the date of the last report to stir up worries about storage capacity, crude oil in storage has risen by 54 million barrels in 47 weeks, an average gain of around 1.13 million barrels a week. If crude oil storage increases maintain that same rate, it will take more than two years to fill the remaining 140 million barrels of capacity in existing tanks.

The situation may be a bit more crowded at the Cushing, Okla., the oil industry’s main pricing hub. The latest data from the EIA puts crude oil storage capacity at Cushing at just over 73 million barrels. There are currently 64 million barrels stored at Cushing, compared with 51 million barrels in storage last March. The average weekly gain over 48 weeks is about 275,000 barrels. At that rate it would take about 11 months to fill the Cushing tanks to the brim.

Storage has become an issue again because demand is falling and producers are cutting production as slowly as they can in order to maintain cash flow, no matter how limited. Will demand pick up before the tanks overflow? Almost certainly.