US on Track to Miss Climate Change Goals

In 2009, the United States agreed to reduce carbon emissions in 2020 by 17% compared to 2005 emissions as part of an international deal known as the Copenhagen Accord. That is very likely not going to happen.

The Trump administration’s 2017 withdrawal from the Paris Agreement and further insecurity about the U.S. commitment to lower carbon emissions could reduce the U.S. total by as little as 11% or as much as 21%. According to Rhodium Group, even the 2018 election of progressive climate leaders won’t “meaningfully impact emissions before 2025.” Lacking a strong federal-level push, the effect of aggressive state-level plans is expected to be limited.

Second, Americans love affair with larger, less fuel-efficient vehicles are on track to fall short of emissions targets in the transportation sector. In the best case, falling battery prices would make electric vehicles more attractive but only about 16% of new U.S. vehicle sales would be electrified in 2025. At that percentage, tailpipe emissions fall by just 12% below 2005 levels. If battery prices decline at a slower rate, only 6% of new sales in 2025 would include electric vehicles and emission reductions would fall by just 8%.

In addition to its effect on electricity generation, low prices for natural gas also threaten to increase emissions from industries such as steel, cement, and chemicals. Cheap gas increases industrial emissions by 7% while higher gas prices could curb the increase to just 1%.

Finally, there isn’t much time left for state and, especially, federal policy to have a beneficial effect on emissions by 2025. The following chart from Rhodium Group gives the ranges of emissions reductions between now and 2030. 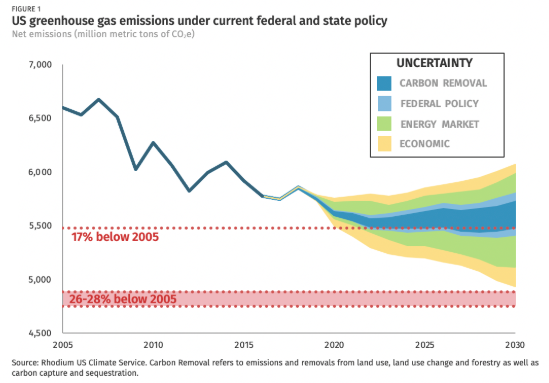 It’s also worth noting that the United States is among the 25 countries that produce the most carbon emissions.

Is Demand Destruction Behind the Drop in Crude Oil Pricing?