Since January, OPEC member nation Libya has not exported a single barrel of oil. The country’s national oil company declared force majeure at that time, a contractual term that essentially declares that a company cannot meet delivery terms for reasons beyond its control. If ever the term applied, it did in Libya.

Last week, the country’s deputy prime minister met with the son of the commander of the renegade Libyan National Army (LNA), which had shut down Libya’s oil exports, and reached an agreement to create a committee to resolve conflicts between the government and the LNA. The shutdown reportedly has cost Libya $9.8 billion in oil revenue, the country’s main source of income.

The announcement of the agreement has sent crude prices plunging. The world’s crude oil inventories continue to be overflowing, and the addition of another 330,000 barrels a day won’t help the situation. Crude prices improved by around 10% last week after Saudi Arabia swore to defend the market with more output cuts. No one, except perhaps the Saudis, believes that any longer.

The government-LNA deal isn’t done yet because it hasn’t been signed. Libya’s Prime Minister Fayez al-Sarraj has neither accepted the deal nor allowed his deputy to travel to an LNA-controlled city to sign the agreement.

Libya sits on the largest reserves on the African continent, 46.4 billion barrels, according to the U.S. Energy Information Administration. The country ranks ninth in the world, just ahead of the United States, with 47.1 billion barrels of reserves.

The following chart from CEICData and OPEC show Libya’s crude exports between 2008 and December of 2019. 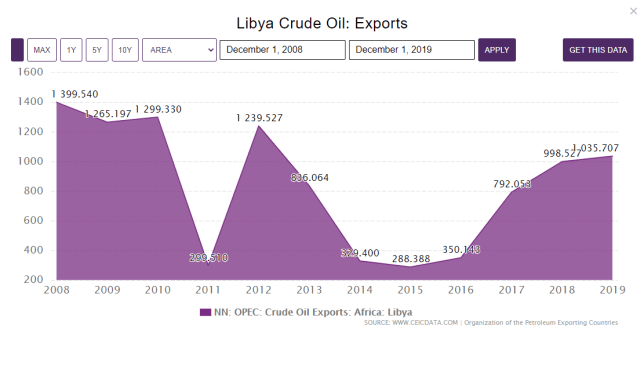 Marathon sold its Libyan assets to Total in 2018 for $450 million. Occidental pulled out in 2015. ConocoPhillips and Hess have maintained their stakes in the Waha concessions.

ALSO READ: With Interest Rates to Remain Low for Years, Buy This Sector for Income and Safety
Get Our Free Investment Newsletter