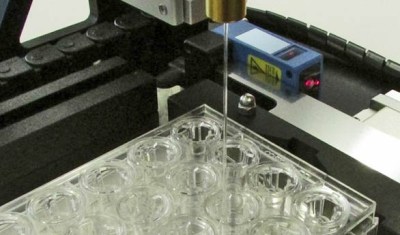 Source: Organovo Holdings Inc.
Mirna Therapeutics Inc. has filed its paperwork with the Securities and Exchange Commission (SEC) to conduct an initial public offering (IPO) for its shares. The company has applied to list its common stock on The Nasdaq Global Market under the MIRN ticker.

No price range nor a number of shares have been indicated. Still, Mirna Therapeutics’ filing has a proposed amount of up to $80.5 million that can be raised. That can of course change prior to the pricing and opening of the IPO.

Citigroup and Leerink Partners were listed as the joint book-running managers, and Oppenheimer and Cantor Fitzgerald were listed as co-managers in the underwriting syndicate.

Mirna is a clinical-stage biopharma outfit which is developing a broad pipeline of microRNA-based oncology therapeutics. microRNAs are said to be naturally occurring, short ribonucleic acid (RNA) molecules which play a critical role in regulating key biological pathways.

The company’s drug pipeline has one Phase I study for solid tumor like HCC, Melanoma, SCLC and NSCLC. Another Phase I was shown to be in hematological malignancies for lymphoma and multiple myeloma. Another four programs were shown to be in the discovery and preclinical stages. The company said in its filing:

Misexpression of even a single microRNA can contribute to disease development and tumor suppressor microRNAs are commonly reduced in cancer. Our scientists and others at leading academic institutions have identified numerous tumor suppressor microRNAs that play key roles in preventing normal cells from becoming cancerous and facilitating proper cancer immunosurveillance. We are developing mimics of naturally occurring microRNAs that are designed to restore this tumor suppressor activity and aid appropriate tumor immune response. This approach is known as microRNA replacement therapy. Our lead product candidate, MRX34, a mimic of naturally occurring microRNA-34 (miR-34) encapsulated in a liposomal nanoparticle formulation, is the first microRNA mimic to enter clinical development and has shown preliminary clinical evidence of anti-tumor activity as a single agent in our ongoing Phase 1 clinical trial. miR-34 is one of the most widely published microRNAs and considered a key regulator of oncogenic pathways. We plan to develop MRX34 as a monotherapy and in combination with other therapeutic modalities, such as targeted therapies and immuno-oncology agents. We believe that microRNA mimics represent a new paradigm in cancer therapy and have the potential to create a new, important class of effective cancer drugs, that can potentially be used alone or in combination with other cancer therapeutics.

We are led by a management team with extensive experience in the biopharmaceutical industry. Members of our management team have played key roles at prior companies, including Bristol-Myers Squibb Company, Pfizer Inc., Reata Pharmaceuticals, Inc. and EMD Serono, Inc. Our principal investors are funds managed by Sofinnova Ventures, New Enterprise Associates, Pfizer Venture Investments, Eastern Capital, Baxalta, Santé Ventures, Morningside Ventures and Celgene. As of June 30, 2015, we had $41.6 million in cash and cash equivalents.

Will Gritstone's COVID-19 Vaccine Be the Best One Yet?

Is Aclaris Therapeutics a Stock to Buy After Nearly 200% Run-Up and Now This?