Most companies that need to raise capital or that want to build up a cushion should do so when times are good or when their shares are doing well. Unfortunately, it’s not a perfect world and sometimes companies have to raise cash during less than optimal times. Tilray Inc. (NASDAQ: TLRY) has raised about $90 million in an underwritten offering. Needless to say, the company chose perhaps the worst time that it could to raise that capital, as the prior trading day was the worst day that the markets have seen since the 1987 crash.

Tilray is considered one of the industry’s leaders as a vertically integrated medical marijuana player that is involved in research, cultivation, processing and distribution of medical cannabis. The Canadian company now has a market cap that is less than $500 million, after having been a multi-billion company by value in 2019.

All the securities in the offering were sold by Tilray rather than by shareholders, and the company’s release indicated that the funds from the offering were earmarked for general corporate purposes. Canaccord Genuity acted as the sole book-running manager for the offering.


This is one of those scenarios that are tough for shareholders, and it puts executives in a bind. Whether you are an executive or an investor, no one knows where the price of a stock is going to be in a month or a quarter, but the need for financing is rarely an instant surprise for management. Tilray shares closed down at $5.95 on Thursday, and that’s after falling 16% from its prior price of $7.09. What hurts here is that, as recently as March 2, this was a $15 stock, and it was a $10 stock just a week ago.

Where this hurts even more is that Tilray was a $20 stock back in January and its 52-week high is all the way up at $75.55. Tilray also had been hitting a series of 52-week lows ahead of this priced offering.

What existing shareholders have to be asking here is why management waited so long to pull the trigger on this funding. No manager knows if their shares are going to keep sliding or will go up, but any executive or investor who says “I was hoping the price would come back up!” is not feeling all that good at the current time. That said, it is unlikely that management did not know it needed funding earlier this year before the markets went into panic mode. Getting the funding back then would not have likely prevented the shares from falling in the crummy stock market drop, but it would have likely been drastically less dilutive and the warrants might have been far more favorable to the company than what was seen here.

Now the question has to be asked if management is worried that things are about to be even more pressured there.

After closing at $5.95 on Thursday, Tilray shares were down another 26.8% at $4.35 on Friday, and the 8 million shares that had changed hands as of 1:00 p.m. Eastern Time was already more than twice a normal day’s trading volume.

The two-year stock chart from StockCharts.com below shows the carnage that has been seen here. 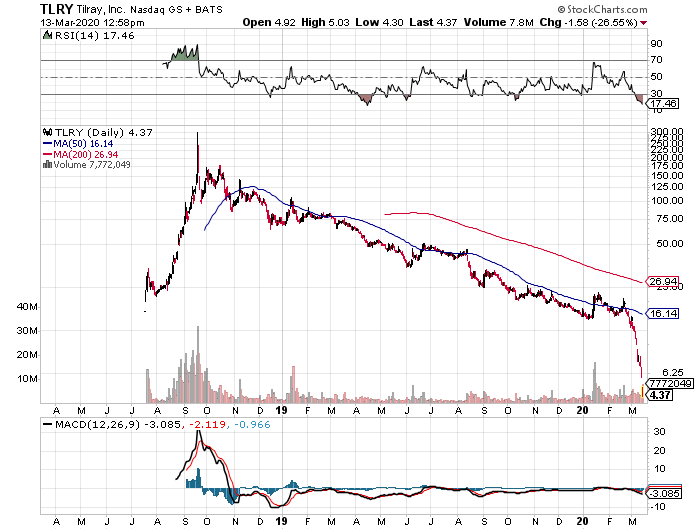