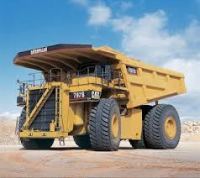 Caterpillar Inc. (NYSE: CAT) has now updated analysts as Chairman & CEO Doug Oberhelman and members of the executive team provided a long-term update for the company’s strategy and expectations for 2015. The report came at MINExpo, the world’s largest and most comprehensive show dedicated to mining. The equipment giant said that geopolitical and economic factors are driving uncertainty, but its base case scenario calls for modest global economic growth over the next few years.

Oberhelman said that the company expects 2015 sales and revenues for Caterpillar to be in a range of $80 to $100 billion. The new target is $12.00 to $18.00 in earnings per share in 2015 as well. A warning os forts was noted by saying, ” Caterpillar is ready to act if we enter a recession. We don’t think it’s likely, but if it happens, we are prepared to react and would expect to remain attractively profitable and to maintain our dividend.”

Perhaps the best news is that the company has specifically committed to maintaining that dividend. At almost $91 at the closing price, the dividend is about 2.2% as of now and that $2.08 per share annualized payout could rise much more down the road if Caterpillar wants to grow its payout ratio.

These States Have the Deadliest Roads in America

Does Your State Have the Worst Roads in America?