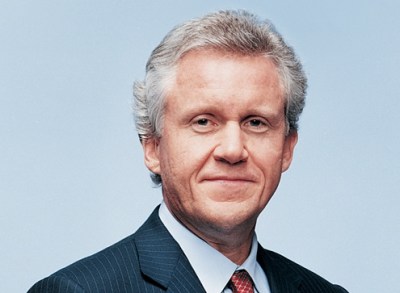 Source: courtesy of General Electric Co.
Several small but well-known companies have dumped the management structure that requires them to have a chief executive officer. Shoe firm Zappos is the most well-known among them. These actions, if effective, could undermine the decades-long belief that business organizations have to be run by a single person. When many large corporations with multiple and somewhat unrelated divisions are carefully analyzed, the “one CEO” tradition might prove to be outdated.

Among the large public corporations looking for a new chief executive is Microsoft Corp. (NASDAQ: MSFT). Apparently, current CEO Steve Ballmer was overwhelmed by the effort to transform the company from a PC-centered one into an enterprise that serves a broader array of technology needs. The requirement for a replacement has raised an old question. Should Microsoft be broken into three or more independent companies — one that owns Windows, one that operates Microsoft’s hardware business and one that runs its divisions targeting companies and enterprises? The traditional solution to the problem is to spin out these operations from the parent, leaving nothing more than a shell behind. The alternative is to have three presidents, each of whom reports to a single board of directors. The board would be burdened with more work. However, Microsoft would preserve the general and administration functions that handle a long list of efforts needed to be publicly traded and to look for and implement whatever plans the software operation needs to effectively exploit what business professors like to call “synergies.”

Another company that holds a number of almost completely unrelated businesses is General Electric Co. (NYSE: GE). Like Microsoft, which was once a longtime favorite of Wall Street, GE has become bogged down in its efforts to get all its divisions to peak performance at the same time. CEO Jeff Immelt has been attacked for a failure to accomplish this. But it may not be something he can achieve with any effectiveness. The head of GE’s medical device division could operate without Immelt. So could its aircraft engine division. None of these needs a corporate-wide CEO to handle its daily work, or its M&A aspirations. Immelt just gets in the way as he acts as a layer of decision making and a buffer between operational executives and the corporate board. GE’s costs of being public, managing its balance sheet and coordinating modest relationships between divisions are chief administrative and chief financial officer functions. A competent board already has relations with the people who handle these tasks. Immelt is in the way of an effective GE turnaround — one that has escaped him for more than a decade.

The list of large companies with divisions that are only tied together lightly is very long. It extends from Berkshire Hathaway Inc. (NYSE: BRK-A), which only has one CEO because he is Warren Buffett, to financial super-stores like J.P. Morgan Chase & Co. (NYSE: JPM), which have mostly unrelated businesses that range from consumer banking to the trading desks, which has gotten J.P. Morgan into so much trouble.

The CEO is a modern invention. However, as the modern becomes ever more modern, the role of the chief executive may disappear, at least at companies that hold large groups of barely related operations.

Orlando Is the Worst Airport in America

Seattle Area Could Run Out of Electricity