While the increase in the S&P 500 index is less than 1% on the day, the indicator has once again posted a new all-time high at around 3,990.58. Stocks have not responded entirely positively to President Biden’s American Jobs Plan, aka the infrastructure plan, even though top-line spending is pegged at $2 trillion.

According to the White House fact sheet, if the plan is passed by Congress along with the president’s Made in America corporate tax plan, the investment in infrastructure “will be fully paid for within the next 15 years and reduce deficits in the years after.”

That tax plan calls for an increase in the corporate income tax from a top rate of 21% to 28%, returning “corporate tax revenue as a share of the economy to around its 21st century average from before the 2017 tax law and well below where it stood before the 1980s.” The plan also increases the minimum tax on U.S. corporations to 21% and “calculate[s] it on a country-by-country basis so it hits profits in tax havens to discourage American companies from shifting jobs and profits overseas.”

It’s that last bit that has given investors pause, of course. Adding $2 trillion to investments like building and repairing roads and bridges, improving mass transit and other big-ticket items would, all else equal, improve corporate profits and investor returns. Taxing away more of those profits does the reverse.

The American Jobs Plan contains four major pieces. The plan calls for investments totaling $621 billion in public infrastructure, $650 billion for a variety of investments in Americans’ homes and schools; $400 billion to expand access to the care economy of “quality, affordable home- or community-based care for aging relatives and people with disabilities”; and $580 billion to support R&D and to revitalize manufacturing and small businesses.

While opposition to the administration’s plan has been muted, that’s likely because details weren’t available until Wednesday. The Wall Street Journal on Tuesday began laying out arguments against a plan that “seeks to give Washington a new commercial role in matters ranging from charging stations for electric vehicles to child care, and more responsibility for underwriting education, incomes and higher-paying jobs.”

It is, the Wall Street Journal continues, a “major turning point for economic policy”:

The gamble underlying the agenda is a belief that government can be a primary driver for growth. It’s an attempt to recalibrate assumptions that have shaped economic policy of both parties since the 1980s: that the public sector is inherently less efficient than the private, and bureaucrats should generally defer to markets.

As for what government might be good at, Freddie Mac (FMCC) has just published a report on the effects of expanded unemployment benefits and direct stimulus payments on unemployed renters’ income during the COVID-19 pandemic.

Using Nevada as an example, Freddie Mac noted that “for the 17 months of April 2020 through August 2021, the unemployed worker would [or will] have received about 95% of their pre-pandemic income through state and federal unemployment benefits and stimulus checks. The stimulus payments represent 6% of this total.”

And the impact on renters’ ability to pay the rent:

Typically rent collections have trailed the previous year’s pre-pandemic collections by just -1.5% to -2%, meaning most individuals have been able to continue to make rent payments in properties tracked by [National Multifamily Housing Council] survey. Some of the larger markets in the country have been severely affected by the pandemic, but nationally the apartment market has weathered the downturn well. 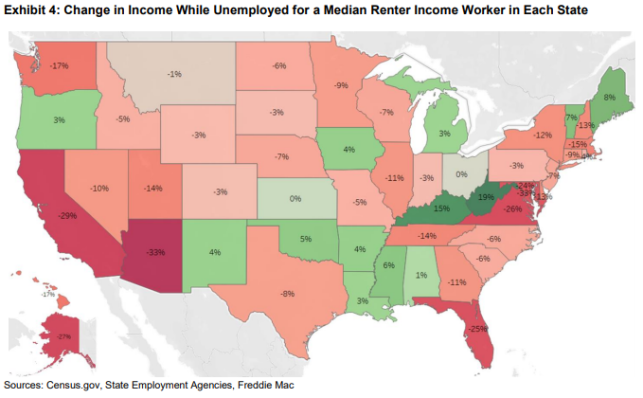 This Country Has the Worst Traffic Congestion in the World