The nature of 24/7’s ranking is such that a state might redeem itself for a shortcoming in one category by exceeding in another. If the state doesn’t produce substantial alternative energy, it may be because its size doesn’t allow for much production, and this would be balanced to a certain extent by low pollution levels. Missouri is a perfect example of a state which falls flat in every statistical category. Out of 28 ranked metrics, the “Show Me State” breaks the upper 25 only five times, with 16th in air particle score being its highest ranking. The state ranks 37th in policy initiatives and 48th in non-hydroelectric alternative energy.

While Texas does well in some areas, such as producing the greatest amount of wind energy in the country, it performs poorly in several pollution categories.  Much of this is due to the high rates of industry in the state. Texas ranks absolute last for CO2 emissions from fossil fuel combustion, having produced over 670 million metric tons of CO2 in a single year.  The second highest amount is produced by California, however that state produced just under 400 million metric tons, a significantly smaller amount.  Among Texas’ other poor rankings are 50th for the EPA’s toxic exposure score, 47th for total toxic chemicals released into waterways, 46th for cancer-causing chemicals released, 45th for developmental toxins released, and 49th for reproductive toxins released.  The state also produces the greatest amount of hazardous waste, generating 13,461,911 tons in one year.  This is over three times the amount produced by the second worst-offending state, Georgia, which generates 4,024,468 tons.

Georgia suffers both from below average policy and alternative energy scores. However, it is Georgia’s pollution which drops the state all the way down to 43rd in our rankings. The “Peach State” is the second-largest producer of hazardous waste, with 4 million tons produced in a single year. It also is 45th in carcinogenic chemicals released into waterways and has the country’s ninth-worst carbon footprint. 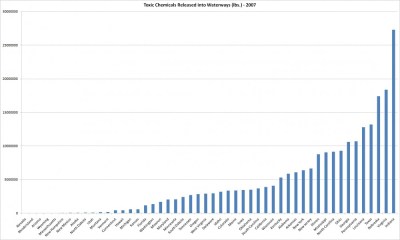 Illinois uses the third greatest amount of energy out of all the states.  Unfortunately, only 1.6% of this energy comes from renewable sources.  This is the fourth worst percentage in the country.  The state, with its heavy manufacturing industry, also received the fourth worst toxic exposure score by the EPA.

Louisiana is another poor performer. It is 46th in energy-saving policies and programs and has the sixth-smallest alternative energy budget. The state rates horribly in water pollution, falling into the bottom five for releasing carcinogenic toxins, total water pollution, and chemicals which can cause birth defects. Louisiana also produces the third-most toxic waste each year – roughly 3.8 million tons.