The Wendy’s Company (NYSE: WEN) has been stuck in the mud.  The company has jettisoned its failed Arby’s experiment and now it is back to a single brand.  This morning came the news that Emil Brolick is going to take over as President and Chief Executive Officer of Wendy’s starting on September 12, 2011.  He will also join the Company’s Board of Directors.

What matters here is that this is the successor move on the retirement of Roland Smith.  Smith will remain an advisor during a transition period for the remainder of 2011 and he does plan to remain on the Board of Directors.  Brolick is actually returning to Wendy’s after having been involved in the turnaround of Taco Bell under Yum! Brands Inc. (NYSE: YUM) as Chief Operating Officer.  He most recently served as president of A&W All American Foods and Long John Silver’s.  He is credited by Wendy’s with being part of what drove Wendy’s as a primary architect of the growth strategy in the 1980s.

Before joining Yum! Brands back in 2000, Brolick was a 12-year Wendy’s veteran and his last position was as Senior Vice President of New Product Marketing, Research and Strategic Planning.  Brolick’s return comments talk about growth opportunities as well as building significant value for the company stakeholders.

If you want to see just how dire the situation has been at Wendy’s versus McDonald’s Corporation (NYSE: MCD) and even versus Yum! Brands Inc. (NYSE: YUM), look at the chart over the last 5-year and 2-Year periods below. Ouch.

Nelson Peltz realized that new blood is needed here, even if this new blood is partly recycled.  At least the admission was made that the Arby’s buyout was not a good one and action was taken.  Most companies would have refused to move on after only about 3-years.  Wendy’s is up over 3% at $5.02 in mid-day trading and the 52-week trading range is $3.98 to $5.62. 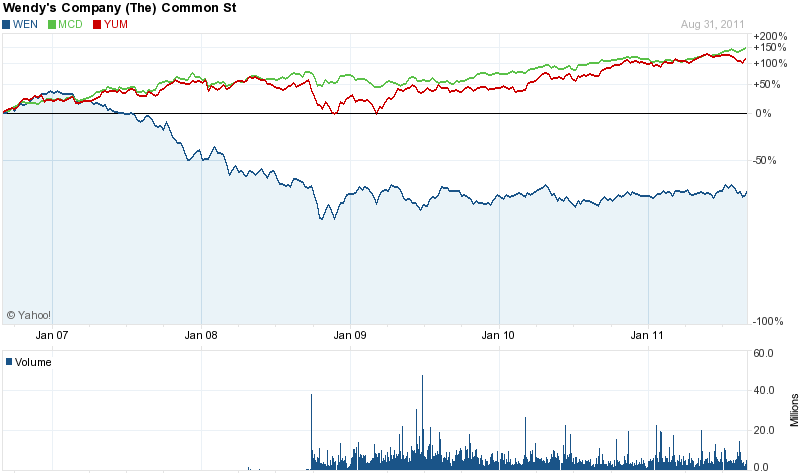 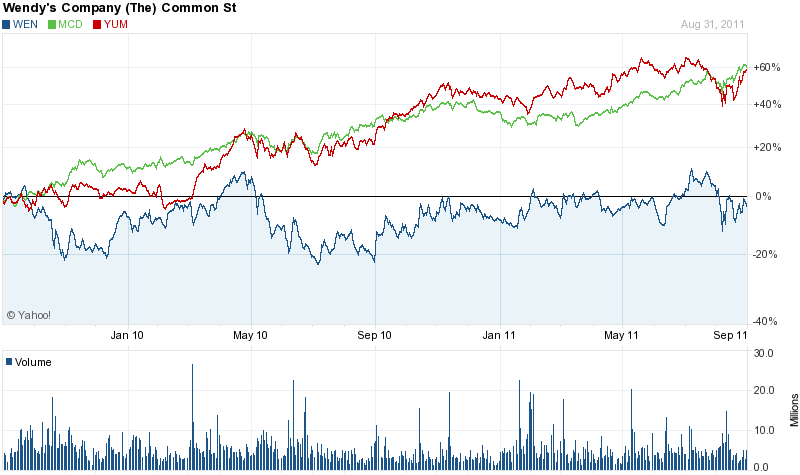