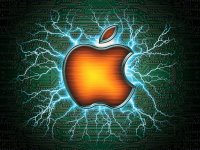 Gross margin was 47.4% versus 41.4% in the year-ago quarter. International sales accounted for 64% of the quarter’s revenue.  Apple generated $14 billion in cash flow from operations.  The consumer electronics giant also gave guidance for the coming quarter of $8.68 EPS and $34 billion in revenue, while Thomson Reuters had estimates of $9.93 EPS on $37.4 billion in sales.  This is light on guidance, but Apple has a long history of under-promising and over-delivering.

Here are the number of units sold, with a note per what CNBC gave as a whisper number earlier today:

Dell Inc. (NASDAQ: DELL) will be paying close attention to those Mac and to those iPad unit sales as it needs to gain market share, while Microsoft Corporation will be watching closely for Mac unit sales as well as iPhone sales considering it has the operating system war going on in PCs and somewhat in smartphones.  Google Inc. (NASDAQ: GOOG) will also be watching this report closely considering its own latest earnings confusion over the shareholder structure news and as Apple was found to have violated one patent on Android phones.  Research in Motion Ltd. (NASDAQ: RIMM) is probably just crying over the report regardless of what it was going to be as its shares are still within a few percentage points of a 52-week low.

We indicated that options traders were calling for a move of up to about $25.00 in either direction using the monthly May expiration options rather than the weekly options.  Analysts had a consensus price target of about $680.00 for Apple stock going into today’s earnings report now that so many analysts have raised their price targets.

You have to wonder about just exactly why things were so bad on that stock chat now.