Massachusetts’s median income is well off its 2008 high of $68,055. Just under 10% of families in the state made more than $200,000 in 2011, the fourth-highest rate in the country. Massachusetts also had the lowest percentage of the population without health insurance in 2011, at a mere 4.3% — a whopping 10.8 percentage points below the national rate. The high rate of insured residents has much to do with a 2006 law signed by then-Gov. Mitt Romney. The law provided near universal health care coverage to all Massachusetts citizens. Among cities with populations of 100,000 or more, three Massachusetts cities — Boston, Worcester and Cambridge — had the lowest proportion of residents without health insurance at 5.5% or less compared to a national rate of more than 15%.

Connecticut is one of only three states, along with Maryland and New Jersey, to have had a higher percentage of families earning more than $200,000 a year than families living below the poverty line. The western region of the state is home to a sizable population of hedge funds, and their employees, along with residents who work in New York’s financial district, helping drive up the state’s median income. Second only to New York, Connecticut had one of the largest gaps between the rich and the poor. At nearly 11%, the proportion of families living below the poverty line in Connecticut is the fifth lowest in the country. Meanwhile, 11.2% of families earned more than $200,000 in 2011, the highest proportion of all states.

Click here to see how all fifty states do with 24/7 Wall St.’s new interactive state tool. 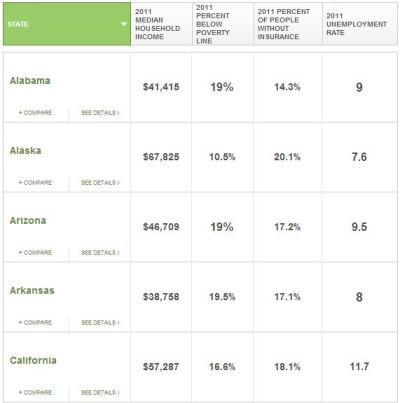 In 2011, Alaska moved ahead of New Jersey to take the spot of the state with the second-highest median household income in the country. The state benefits from its vast natural resources, particularly oil, natural gas, and timber. Since 1957, the state has collected nearly $100 billion in taxes from oil and gas companies, and Alaska oil production has accounted for more than 13% of total U.S. production. Most residents reap the benefits from these payments. Income inequality in the state is the second-lowest in the country. Just 3% of Alaskan families earned less than $10,000 per year compared to the 5.1% nationwide. Meanwhile, despite the state’s high median income, just 5% of families earned more than $200,000 per year.