5 Stocks That Led The Market on Monday 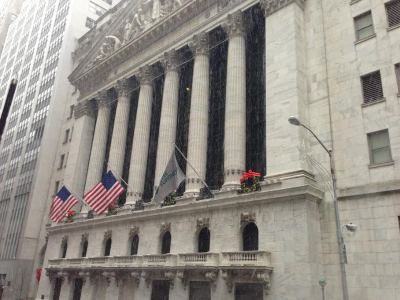 Source: Jon Ogg
The markets had only a small employment report from the Conference Board to consider on Monday, as well as a surprising government budget surplus, to drive stocks today. Unfortunately, Goldman Sachs had issued a report showing that equities were becoming fully valued. That put the fix in on stocks to the downside.

Several DJIA stocks led the charge lower on Monday, and we have compared 52-week ranges and consensus analyst price targets in case this is the start of what we consider a much needed market correction. While all but one of the thirty DJIA stocks was up on the day, Merck & Co. (NYSE: MRK) kept the DJIA drop from being even worse.

Microsoft Corporation (NASDAQ: MSFT) was the DJIA’s biggest loser in percentage terms on Monday. Rumors of yet another version of Windows coming to market sooner than expected are not going to get a great reception. Then there is the ongoing CEO vacuum. Microsoft shares were down by 3% at $34.97 in the final minutes of trading. The good news is that Microsoft shares are now down a tad over 10% from the 52-week high of $38.98 and are now down just over 5% from the consensus analyst price target of $36.94.

Merck & Co. Inc. (NYSE: MRK) was the only real standout stock in the DJIA on Monday. Its gain was big because the company’s anti-clotting drug Vorapaxar is getting an expedited FDA review. The company also gave an update on its accelerated strategic actions for growth at the Annual J.P. Morgan Healthcare Conference. The DJIA would have been far worse without Merck on Monday. Merck’s stock was up about 6.5% at $53.13 in he final minutes, and the stock hit a new 52-week high of $53.44. Analysts are either going to have raise their price targets or the stock is reaching a downgraded risk because the consensus price target is currently just above $52.