8 Companies That Have Seriously Damaged Prospects for Investors

Following this news, the stock fell to a new 52-week low of $19.35 on Friday, before closing down 13.5% at $20.00 even. Investors have to wonder if this valuation for slowing growth and a business model that could be at risk is worth the massive premium now. Its stock has a consensus analyst price target still up at almost $32, and the new 52-week trading range is $19.35 to $40.44. Now that Pandora’s shares have been cut in half, that is a sting that will burn many investors, potentially for years to come, even if the stock recovers from the current lows.

What investors have to come realize, perhaps even long before this earnings confession, is that they just bid up the promises for 3D printing growth far too high. Bubbles happen, and the 3D printing bubble valuation has come and gone. 3D Systems closed down almost 12% to $36.67 on Wednesday, after closing the previous Friday at $41.55. This Friday’s close was $37.07. The analyst at Oppenheimer stepped into this vortex hours before the company issued its guidance. The consensus analyst price target for the stock is $49.25, and it has a 52-week trading range of $36.17 to $97.28.

ALSO READ: What to Think When Platinum Prices Go Lower Than Gold

A search algorithm change in Google was a culprit, but what if Google decided to have this service on its own or to limit Yelp from search? Following Yelp’s earnings news, the stock closed down almost 15% to $57.17 on Thursday since the close the previous Friday at $67.09. This Friday’s close included a recovery of nearly 4% to $59.42 as analysts may have provided support, against a 52-week trading range of $49.11 to $101.75. The problem is that Yelp has to blow out estimates because it is valued at almost 500 times this year’s expected earnings and at 150 times next year’s expected earnings.

A montage of charts has been included from StockCharts.com to show how damaged these stocks have become (click to enlarge). 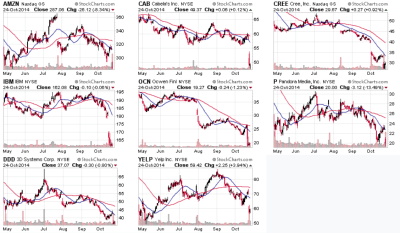