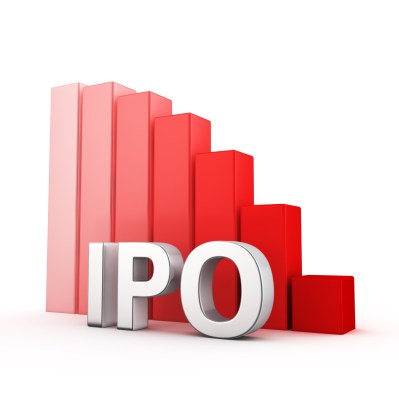 Source: Thinkstock
What was supposed to be the year-to-date’s largest initial public offering went ahead Thursday morning with First Data Corp. (NYSE: FDC) selling 160 million shares at an IPO price of $16 per share, nearly 30% below the mid-point of the expected range of $18 to $20. With gross proceeds of $2.56 billion, it’s still the largest IPO so far this year.

The market for IPOs has been markedly below last year. Even if fourth quarter IPOs reach a total equal to Q4 of 2014, total 2015 proceeds will remain well below total 2014 proceeds for just 3 full quarters. Largely that’s due to the $21.8 billion September 2014 IPO of Alibaba Group Holdings Ltd. (NYSE: BABA), but even stripping Alibaba’s IPO out of last year’s total shows a gap $24.5 billion for the first nine and a half months.

If Albertsons fails to get the price it wants for its IP and either postpones or withdraws the offering, 2015 could be an even worse year for IPOs. There have been few momentum-generating tech or energy IPOs this year. For the third quarter returns were a negative 4% according to IPO ETF manager Renaissance Capital, the first time that’s happened since 2011. Biotech issues have picked up some slack, but the market’s appetite for more of those has fallen off too.