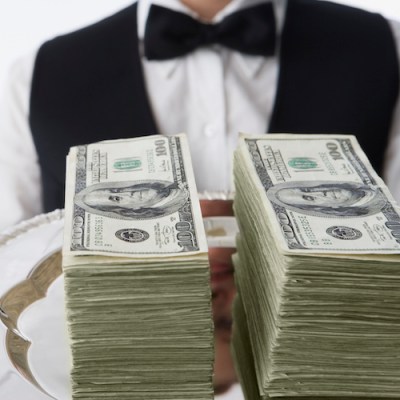 Source: Thinkstock
Carlyle Group L.P. (NASDAQ: CG) is one of the most successful private equity and asset management firms in the world. It has a market cap of $7.4 billion, and its stock trades near a 52-week high. However, its new co-CEOs will have base salaries of only $275,000 each when they begin their jobs early next year. The base salaries show how little such sums can be with complex compensation packages. Each of the two stands to make much more.

Founders David M. Rubenstein and William E. Conway Jr., who have become fabulously wealthy, will turn over the reins to Kewsong Lee and Glenn A. Youngkin. According to a filing with the SEC:

Under the employment agreements, each Co-CEO will receive a base salary of $275,000, which may be increased from time to time by the Board.

Also in the filing are two other sets of compensation:

In addition, during the Term, each Co-CEO will be eligible to receive an annual cash bonus equal to the distributions per common unit of the Partnership paid with respect to the applicable calendar year multiplied by 2,500,000 (subject to equitable adjustment by the Board in order to account for distributions, splits, reorganizations, recapitalizations, mergers, consolidations, spin-offs, combinations, exchanges or other similar events; and, following a Change of Control (as defined in the Second Amended and Restated Agreement of Limited Partnership of Partnership, dated as of September 13, 2017), the parties must negotiate and agree to an adjustment such that after the Change of Control the bonus opportunity is no less favorable to the Co-CEO than prior to the Change of Control).

Based on a Bloomberg analysis of the compensation of the current co-CEOs, on close examination:

Carlyle Group LP will hand its incoming co-chief executive officers bonuses and stock that will add several million dollars to their annual base salary of $275,000.

So, their base salaries mean close to nothing.