Outplacement firm of Challenger, Gray & Christmas on Thursday released its job-cuts report for July. It shows that a total of 38,845 planned U.S. job cuts were announced last month, a decrease of 7.5% compared with announced June cuts. Compared with cuts announced in July 2018, this year’s total is 43.2% higher, even though it’s the lowest monthly total since last August.

Announced job cuts in the industrial goods manufacturing sector are up more than 500% year to date. A total of 52,054 job cuts have been announced so far in 2019, compared with cuts of just 8,276 for the same period a year ago. The sector lost 4,403 jobs in July.

The transportation sector announced the most cuts in July, with 5,532 jobs lost, bringing the sector’s year-to-date cuts to 19,039. According to industry news site FreightWaves, seven trucking firms have closed in 2019, the most recent shutting its doors on Tuesday.

Andrew Challenger, vice president of the outplacement firm, said, “[S]lowing GDP growth in the second quarter, cuts in business investment, and trade tensions led the Federal Reserve to cut its key interest rate by a quarter-point. This move signals trouble on the horizon for the current economic cycle. Employment tends to be a lagging indicator, as companies often keep hiring up to the edge of a recession. Right now, the labor market is strong. Employees can continue to anticipate moderate wage growth and advantageous employment prospects for the time being.”

For the year to date, California (49,986), New York (40,588) and Massachusetts (34,046) have lost the most jobs. You may expect to have a difficult time finding a job in these states, too. However, this is not necessarily the case. These are the hardest states in which to find a full-time job.

U.S. tariffs have begun to affect the manufacturing sector, Challenger noted: “Manufacturers are being hit, not only by shifting consumer behavior and automation but by the imposed tariffs. Last month saw over 1,000 cuts announced due to the impact of tariffs.” So far this year, tariffs have accounted for 1,430 job cuts in the manufacturing sector, with 1,035 coming in July alone.

Other sectors hit with major losses in July were pharmaceuticals (3,062 jobs cut), energy (3,737) and financials (2,143). For the first seven months of the year, the pharmaceutical sector’s cuts are a third higher than in the same period a year ago, the energy sector’s job losses are nearly 260% higher and the financial sector job cuts are 74% higher.

Retailers announced 1,919 job cuts in July, but the sector remains the leader in announced job cuts with 55,167 announced so far this year. That’s well behind 2018’s total of 75,763 cuts in the first seven months of the year.

The top three reasons given for job cuts this year are restructuring (92,885), the business is closing (73,402) and bankruptcy (42,937). None of these are in the employees’ control. And some jobs have a much higher turnover than others. Here’s a list of the jobs that offer the best (and worst) job security. 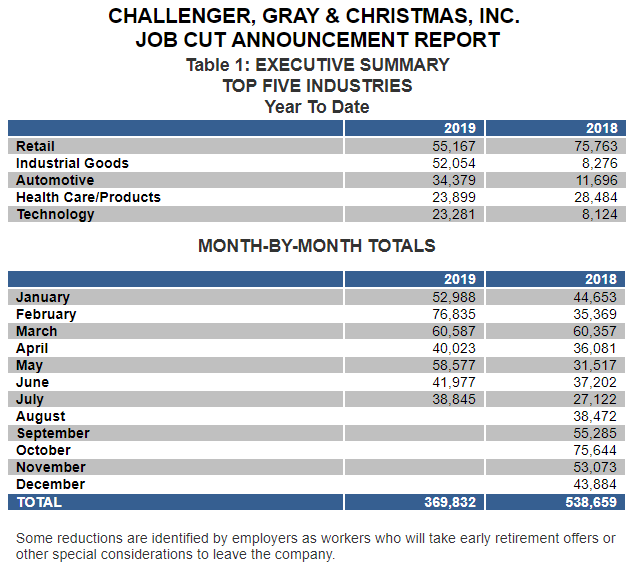 This Is The State Where People Are Working From Home

This Is The Best American City To Find A Job

This Is the Noisiest Job in America